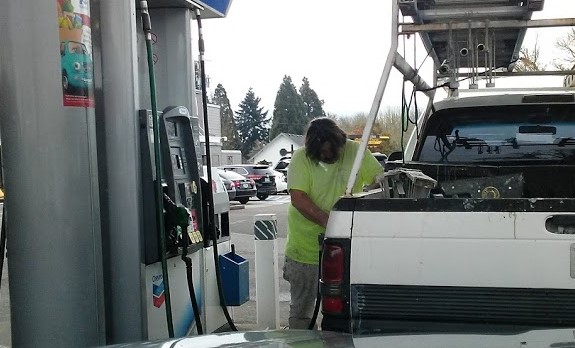 At a busy mid-valley station on Friday: apparent self-service in action.

Gas stations in Albany and elsewhere in western Oregon would be allowed to let customers pump their own gas at some of their pumps if House Bill 3194 becomes law.

Whether the bill does become law is hard to say. The Joint Committee on Transportation held a hearing on the bill on March 20. But there seemed to be little interest. Only three people including the sponsor testified for it, and another legislator testified against it. The hearing room was all but empty.

The committee has scheduled no work session on the bill. Unless one is scheduled pretty soon, the bill is probably dead.

In the past two sessions, the legislature loosened the ban on self-serve gas for counties in eastern Oregon. There, in counties with 40,000 or fewer residents, self-service is now allowed 24 hours a day.

The Oregon ban on gasoline self-serve dates from the 1950s and was justified on grounds of safety. Pumping gas is supposed to be risky, according to Oregon law, and only trained people are supposed to do it. New Jersey has a similar law. But the reasoning is plainly nonsense, as millions of people in the other 48 states and around the world demonstrate every day.

Already in Oregon, motorcyclists are allowed to pump their own gas. So are customers of card-lock stations. Oregon has no good reason to ban it for the rest of us.

Still, why mess with this law, silly as it is? The transportation committee was told that in opinion surveys, Oregonians are split almost evenly for and against maintaining the law as it is. Sen. Brian Boquist, R-Dallas, a committee member, called the bill a “wonderful compromise” between both views. Stations owners would have to to keep attendants, but they could — but would not have to — allow self-service at up to 25 percent of their pumps.

Here’s one reason for allowing even a small amount of self-service for the general motoring public: Long-time Oregonians would learn how the pumps work. They would no longer look befuddled and act bewildered the first time they have to get gas out of state. (hh)