Seeing that hull brings back memories 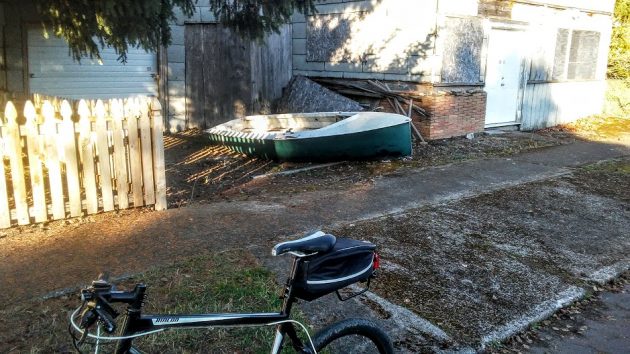 On Nov. 21, the hull of this sailing dinghy sat where it has sat for many years.

Sometimes the bike takes me along East First Avenue in Albany, and when it does I always check whether something has been done with the sailboat hull sitting there, near the corner of Oak. So far, the answer is no. Not yet.

The hull has been there for I don’t know how many years. It’s made of fiberglass, so it has held up pretty well. But now the gel coat near the bottom of the starboard side of the bow shows signs of decay.

It’s easy to see, from its distictively plumb stem, that this is a C-Lark. That’s the name of a one-design, sloop-rigged sailing dinghy, with a beam of 5.7 feet, 14 feet long overall, and 14 feet long on the waterline too. With the retractable centerboard down, the boat has a maximum draft of 3.5 feet.

I recognized the hull on First Avenue the first time I saw it, years ago. That’s because in the early 1970s, I learned to sail from my brother-in-law Bruce Sturm, who sailed and raced a C-Lark on Howard Prairie Reservoir and had me crew for him a few times.

Howard Prairie is a great sailing lake in the Cascades of Southern Oregon, and there was a fleet of C-Larks in the Medford area that held regular regattas there. After sailing with Bruce, I soon got my own boat, a similar but different design, and spent many happy Saturdays sailing that fine lake.

The C-Larks were designed by Don Clark and made mostly by the Clark Boat Company, of Kent, Wash. Production began in 1964 and ended, some 1,400 boats later, in 1979.

I talked to the owner of the hull on First. He told me he and his wife had bought the boat — which was for sale because it had a broken mast — for the trailer it came with. They wanted the trailer for another dinghy. But as it turned out, the trailer was stolen from the very spot where the boat still rests.

The owner says he still hopes to restore the C-Lark and find a new mast. I hope he does, and that some day this hapless hull will float once again. (hh) 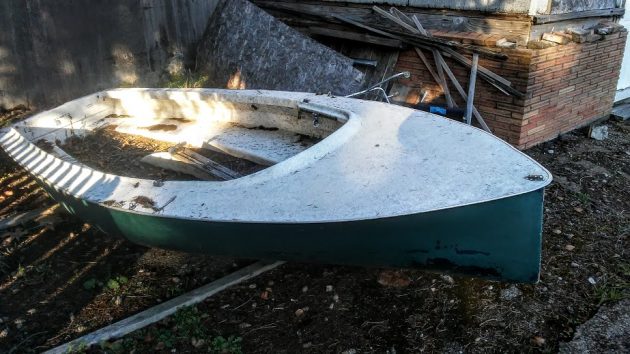 A closer look: C-Larks are fast on the water and look kind of salty even in this shape. 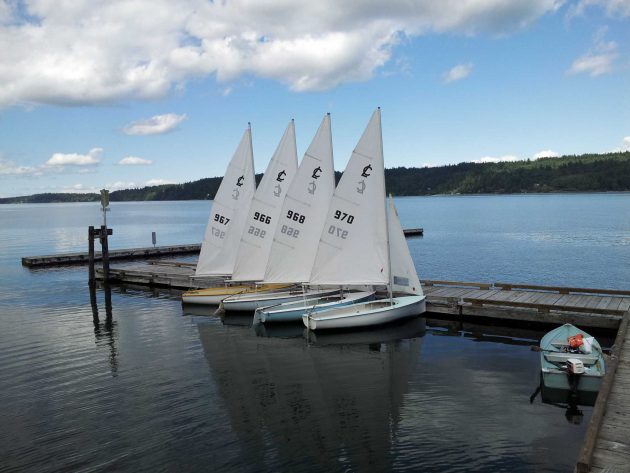 You can find photos of C-Larks online, including this from the Peninsula Sailing Club in Bremerton, Wash.


5 responses to “Seeing that hull brings back memories”