I can’t imagine anybody is happy about what’s been going on at North Albany County Park. But Benton County said those trees had to come down because they had fallen victim to a combination of poor soil, drought and bugs.

A section of the park, on its eastern side, now looks like a small clearcut. Throughout the park, scores of Douglas firs were cut down because they had become what the county called “hazard trees,” in danger of becoming snags and eventually crashing down on whatever or whoever was in the way.

Monday was scheduled to be the last day of the logging in the park itself. Next week, the county said before all this started, the tree removal would move to the natural area left standing (so far) at the corner of Valley View Drive and Crocker Lane. (For more details about this project for further planning for the park, you may check the Benton County Natural Areas and Parks website. Or you can look up the many previous stories on this park by using the search feature at hh-today.)

Eventually, the park and the natural area are to be joined with a walking path. Looks like at least for a few years, it won’t be a path through the woods. (hh) 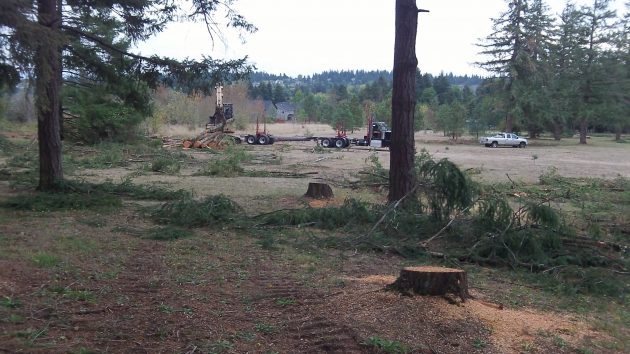 
4 responses to “Section of NA park now a clearcut”