Second turn lane from First: Not in sight 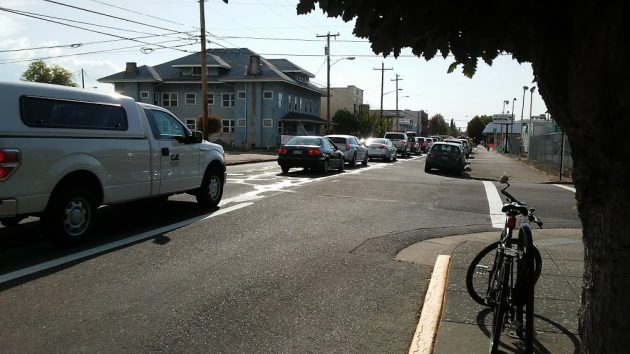 On Thursday afternoon, First Avenue traffic waiting to turn right on the Lyon Street bridge is backed up to Montgomery Street.

Whatever happened to the idea, a reader wanted to know, of adding a second right turn lane on Albany’s First Avenue at the Lyon Street bridge?

The answer is that the idea is still kicking around. But nothing’s getting done about it because of ODOT inaction and lack of designated funding.

As it is, traffic on First Avenue backs up most afternoons because the signal at Lyon Street, which is Highway 20, favors the highway. Almost all those vehicles are waiting to turn right across the bridge into Benton County.

Four or five years ago, says Ron Irish, the city’s transportation systems analyst, the idea of adding a second right-turn lane from First to the bridge was added to the list of potential projects in Albany’s Transportation Systems Plan.

ODOT consent is required, and the city hoped the state would add the extra lane to its list of funded projects. But it hasn’t happened. And Irish says if the state doesn’t come around, the city some day may consider doing this with its own money. That decision has not been made.

Adding the second turn lane would mean acquiring a small amount of additional right of way and getting rid of four or five parking spaces. “The loss of parking would be a concern but probably worth it given the capacity and delay improvements that would result from the addition of a second turn lane,” Irish wrote in an email.

But don’t count on this taking place any time soon, perhaps not in the lifetime of some of the drivers waiting on First. (hh)


4 responses to “Second turn lane from First: Not in sight”