Second day of flooding around Albany

As the video illustrates with one example, Bryant Way, the flooding of low-lying roads around the mid-valley got worse on Tuesday. It may have been fun and games for tourists gazing at the under-water parks along the Willamette, but not so much for commuters.

High water washed across Highway 34 east of Corvallis, putting more traffic on Highway 20 and causing gridlock near the Ellsworth Street Bridge outside Albany.

The Weather Service said the Willamette at Corvallis would rise above flood stage tonight and won’t crest — at 31.6 feet — until late Wednesday morning. So you can expect Highway 34 to be closed Wednesday, too. Commuters having to cross the river might want to get a very early start or, better yet, take the day off if they can.

Based on forecast rainfall and temperatures, as well as current and planned releases from the reservoirs, the Weather Service continued its flood warning along the Willamette in this area until Thursday afternoon “or until the warning is cancelled.” The next update will be issued at 5 a.m. Wednesday. The warning covered the Willamette from Harrisburg to Albany.

In Albany, the Willamette topped 23 feet at 6 p.m. Tuesday and is expected to crest at 26.56 feet Wednesday evening. Flood stage is 25 feet.

“Above 27 feet, expect some flooding in Bryant Park, as well as some flooding in South Albany,” the Weather Service said. I guess they hadn’t looked at Bryant, where the entire park except for a couple of high spots was under water with the river at “only” 23 feet. 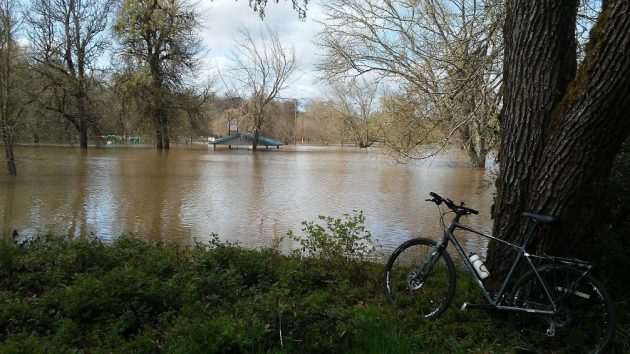 All of Bryant Park was under water on Tuesday afternoon. 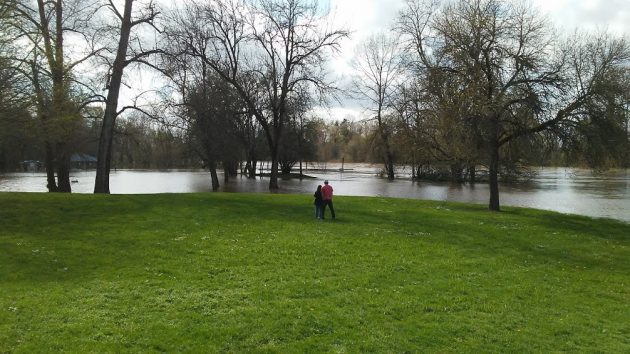 So was most of Bowman Park except this grassy hillside. 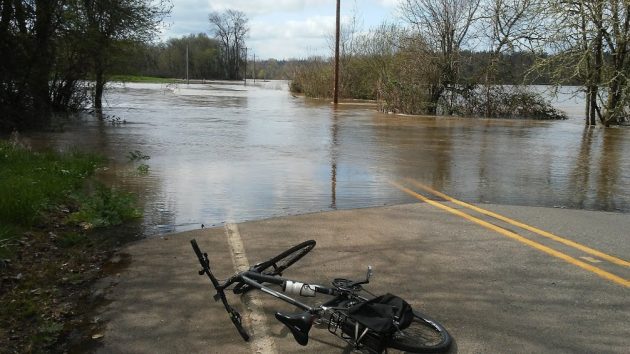 There was no place to lean the bike on Bryant Way on Tuesday afternoon.


7 responses to “Second day of flooding around Albany”