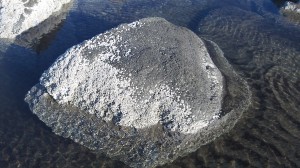 Barnacles on a seaside rock.

Well, another stroll on the beach, and still no sign of that rising sea level we hear so much about. Yes, I know the climate change folks talk in terms of a meter or more by the end of the century, so it’s not exactly imminent. And presumably we would not even notice any annual rise by just keeping our eyes open.
But if the ocean is going to rise more than three feet by 2100, it had better get going. There’s only 86 years left to reach the increase the climate change Cassandras are warning us about.

If you’re worried about this, you won’t be after taking an occasional walk on the beach and watching the ocean rise and fall depending on the time of day and the prevailing wind. Sure, now and then a piece of road has to be shored up, and sometimes a headland is undercut by the waves and falls into the surf.

So what? The sea level was several hundred feet lower when man first set foot on this continent, and somehow we’ve managed to cope with the seas coming up ever since, mostly by getting out of the way. (hh)