Science at work: The effect of AC 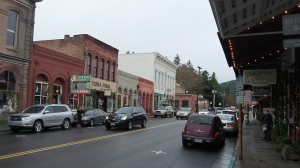 Oregon in December, when no one worries about air conditioning.

I see in the paper that scientists have made another breakthrough. They have studied the issue long and hard and discovered that since the advent of air conditioning, deaths from high heat in the United States have declined. At least that’s the conclusion the Washington Post reported in a story that made local papers on Sunday.

This new study, as summarized by the story, “has found that home air conditioning played a key role in reducing American death rates during the past half century.” How did air conditioning accomplish that? You would never have guessed it on your own if the report had not told you that it was done “by keeping people cool on extremely hot days.” Yes, that’s what air conditoning can do. Amazing.

And mind you, this was not the wild idea of some lone academic laboring away in his ivory tower on a hot day. No, it was the result of the combined efforts of a whole team of researchers from Tulane and Carnegie Mellon universities along with the National Bureau of Economic Research and the Massachusetts Institute of Technology. They looked at patterns of heat-related deaths between 1900 and 2004, and they determined that a lot fewer people died on very hot days after 1960.

Now this paper was said to be still under review at a scientific journal. Let’s hope that the reviewers don’t find something wrong with the study. It would be a big disappointment to discover that air conditioning does not work after all.

Oregon in December, when air conditioning is not an issue.

The reporter in this story included a helpful hint for people in countries like India, where it’s hot much of the time: They might want to install AC before global warming makes it hotter still. Wow, isn’t science great? (hh)