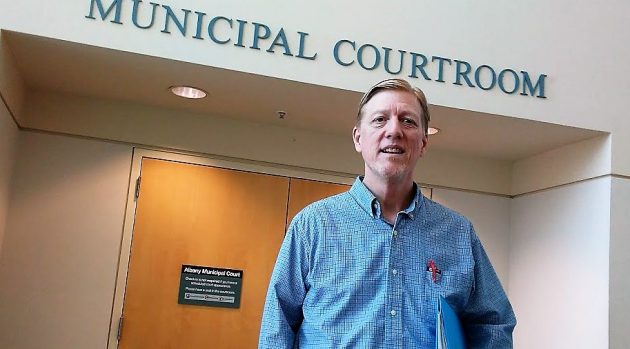 Johnny Scot Van Ras after what turned out to be his winning argument in city court on Jan. 28.

One part of the Great Waverly Drive School Zone controversy has been resolved with a verdict in Albany Municipal Court: Not Guilty!

On Monday Johnny Scot Van Ras received a laconic letter from the city court. “RE: Citation 12232,” it said. “The Municipal judge has found you not guilty on the above citation. Thank you. Albany Municipal Court.”

A copy went to Albany Police Officer Steve Corder, who at 9:13 a.m. on Thursday, Oct. 11, had cited Van Ras for driving 39 mph in the 20 mph school zone on Waverly, east of the South Albany High School athletic fields. The normal speed limit there is 40.

Van Ras, a 62-year-old retired mill worker who lives on 45th Court S.E., did not deny that he had driven the ticketed speed. His argument was that the school zone was not properly enacted, so that legally it was not a school speed zone at all. He cited two failings of this zone: Contrary to ODOT guidance, it was created without an engineering study justifying it, and it lacked signs showing where it ends.

For his 15-minute trial on Jan. 28, Van Ras appeared by himself, without a lawyer or anyone else to advise him. It was just him in the courtroom, along with Officer Corder, Judge Robert T. Scott, one or two other defendants in other cases, and one observer (me).

The judge at first sounded skeptical but took the case under advisement. A few days later, after reviewing the law and ODOT regulations, he wrote Van Ras saying he was inclined to agree with him that zone-ending signs were required. He sought the defendant’s consent to consult with the city attorney because this outcome would have a significant impact on the city. But Van Ras declined, saying in his reply that the city council had had plenty of opportunity to consider the situation.

The court’s letter with the not-guilty verdict followed. It was dated Feb. 7.

Van Ras was the second of two southeast Albany residents — the first was Diane Conrad — who appeared before the city council last year, asking the city to get rid of the school zone on Waverly near South High as unnecessary, or to modify it. The council then asked for an engineering study, which the city’s Traffic Safety Commission will review at 10 a.m. Monday at City Hall. The study recommends that the 1,200-foot zone be shortened to 400 feet and remain in effect from 7 to 5 on school days.

As for the significant impact of his ruling mentioned by Judge Scott, its extent is unknown. Chances are that once the study’s recommendations are carried out, modified or rejected, the city will hasten to install signs to show exactly where the zone ends. In the meantime, tickets for failing to slow to 20 mph are unlikely, as long as Judge Scott is on the bench.

As it happens, the judge, a contract employee of the city government, announced to the council Monday that he’ll retire on Dec. 31 this year. He had informed the city manager of his plans a couple of months ago, so clearly his decision to retire had nothing to do with this case.

In his annual report about court operations and finances, Scott reported that cases filed in the city court increased 15 percent in 2018, following a 25 percent boost the year before. After payments to state and county, net revenue from fines rose too, to $840,817. But so did expenses, partly due to payments to court-appointed lawyers and an increase in the cost of housing prisoners at the county jail. Upshot: the city court in 2018 had a deficit of $75,544, still significant but almost 60 percent smaller than the year before. 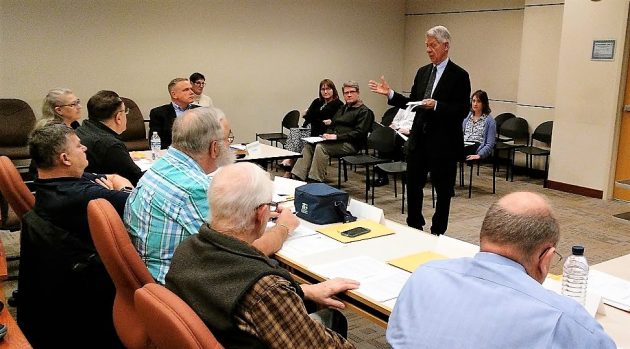 In a file shot, Judge Scott talks to the city council a year ago, in January 2018.