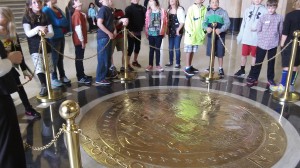 Children at the Capitol: The school funding debate continues.

The Oregon Senate on Monday failed to approve a record increase in the state school fund. The opponents, all 14 Republicans plus Democrat Chris Edwards of Eugene, said it wasn’t enough and the state could do better.

The bill, Senate Bill 5519, proposed to set the school fund at $6.55 billion for the next two years, an increase of a billion dollars. But the Republicans complained that one-third of the increase would go not to teachers or classrooms at all but be swallowed up by the public employee retirement system.

The Republicans want reforms in the retirement system that would further reduce its costs to all public employers including schools. Democrats counter that some PERS reforms already have been enacted and more drastic ones would likely be struck down by the courts. Or they wouldn’t save as much as the Republicans claim.

The Senate discussion Monday was about money. More fundamental issues don’t get mentioned in that context. For example, are big public school systems still the best way to prepare young people for life? Would smaller units, organized differently, yield better results for more people at a smaller overall cost?

Until we find satisfactory answers to fundamental questions like that, there will never be enough money and Oregon politicians will keep having to argue about school funds every two years. (hh)