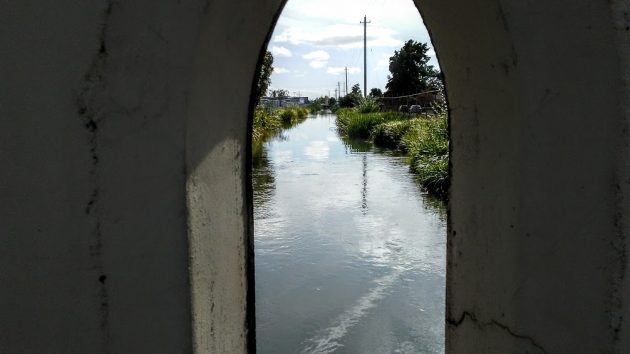 We’re looking south along the Albany Santiam Canal, from the 12th Avenue bridge. To get this angle, you have to get down on your knees and peer through one of the arches in the concrete railing.

If you stand up, the view looks like this. 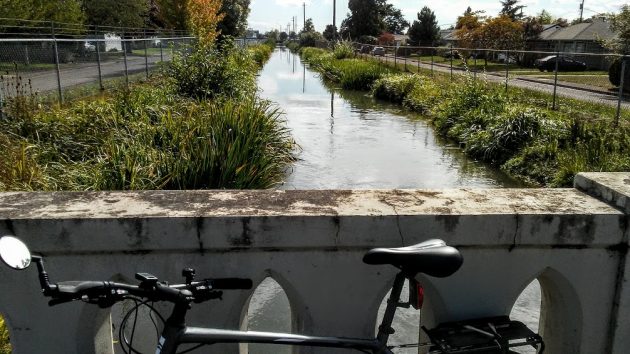 Which is still pretty scenic, you have to admit.

The canal has been there since the 1870s. For years it was the source of Albany’s domestic and industrial water supply. It still is that, but since the city built a second intake and treatment plant off Scravel Hill on the Santiam River in 2006, it’s no longer the only source.

You’d think a publicly owned canal right through the middle of town would be exploited as a scenic or recreational asset. On sections in south Albany, for a short distance one might even paddle a canoe.

But for a variety of reasons the city administration, which runs the canal, does not see it that way. It does not want to mess with an important water supply, and it doesn’t want the liability of people getting too close, let alone using the canal for anything.

For years when he was on the city council, the late Ralph Reid Jr. was pushing for an idea of his: Put the canal in a big pipe. That would solve all kinds of problems, he thought. Then we could build a shallow creek on top of the pipe to make a nice little stream with sloped banks and benches and so forth. You can review Ralph’s concept here.

But there was never any support for that concept, and there isn’t any now. Think of the millions of dollars it would cost. The city’s urban renewal program once included doing something less dramatic with the canal downtown, but that’s been dropped as well.

So if you want a scenic look, you have to stand or kneel on one of the bridges and gaze along the water. And then, when you turn around, you see the reality: A section of the barbed wire fence that lines both sides of the canal to keep people from getting too close. (hh) 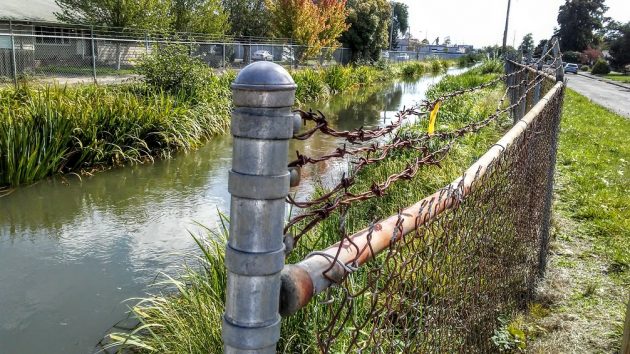 
8 responses to “Scenic Albany: Thoughts on the Santiam Canal”