Scenery getting cleaned along Albany paths 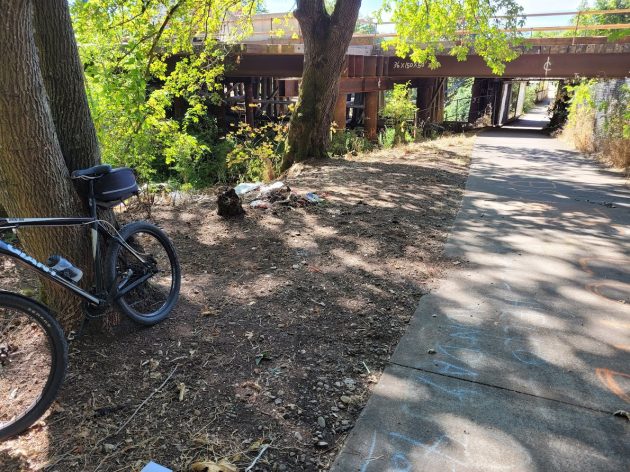 The side of the Cox Creek path near the railroad crossings looked substantially cleaner on Thursday afternoon.

There has been considerable progress in the cleanup of vagrant camps along two of Albany’s multi-use paths. You cannot help but notice this if you go past these places every few days.

The Cox Creek Path connects the parking lot of Simpson Park with Salem Avenue. Just east of where it ducks under the Portland & Western and Union Pacific tracks, a vast mess of debris had accumulated for some time. On the path itself, much of the stuff collected there was moved into piles this week. And Thursday afternoon the piles were mostly gone.

The land on both sides of the path, down to the creek itself, is owned by the Albany Masonic lodge, which operates the Waverly Memorial Cemetery off Salem Avenue.

When I inquired about the apparent cleanup, I heard from Kris Schendel, the code compliance officer with the Albany police. “I am currently working with the lodge to get this area cleaned up,” he wrote in an email.

Camps on the lodge’s land have caused complaints from neighboring property owners, users of the path, and visitors to the cemetery. Schendel told me the lodge spent about $1,900 last month cleaning up parts of the property, “but it is an extensive project.”

A contractor is to pick up piles of stuff along the path on Aug. 10, Schendel said.

He also is working to arrange for equipment to clear the bushes between the creek and the path, where it runs along the cemetery, to open up sight lines, and he hopes local volunteer groups will help to clear out blackberry bushes and take out some tree limbs.

“My hope is to have all items completed by early September,” he said.

This is not the only place where cleanup has taken place. Another is the Periwinkle Bikepath extension to Ninth Avenue behind Lowe’s. The encampments I saw there a month ago are gone, and so is almost all the trash surrounding the campsites.

I don’t know who did the good work on the Periwinkle Path, but thanks to whoever it is. (hh) 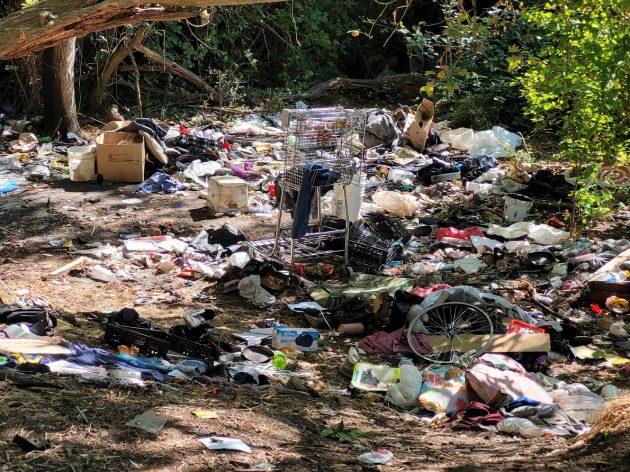 On the bottom of the Cox Creek canyon, on Thursday a lot of work remained to be done.


3 responses to “Scenery getting cleaned along Albany paths”