Scale back the Albany riverfront project? 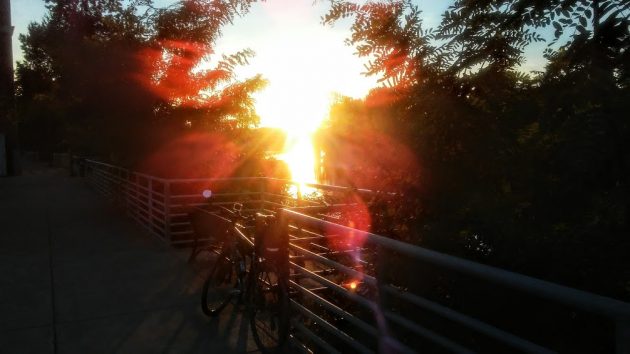 Before sunset on the Dave Clark Trail on Sept. 3. Albany’s riverfront project involves the path, too.

If you’re interested in the Albany Riverfront Project, or concerned about its future cost, you might want to tune in to the city council meeting Wednesday, Sept. 9

The council agenda includes a discussion about the project, started by the CARA urban renewal district last fall to upgrade Water Avenue and the riverfront from Monteith Park in the west to Main Street in the east, a distance of 14 blocks.

As I understand it, city officials want the council to consider whether to limit the overall project before the planning goes much further. Instead of redoing all of Water Avenue, for instance how about just the part that would turn the west end into a “plaza street” where events could be held?

Last fall, the Albany Revitalization Agency, which governs the CARA urban renewal program and consists of the city council, hired Portland-based consultants Walker Macy for up to $2.36 million to come up with designs and buildable plans for the riverfront.

So far their designs include major changes in Monteith Riverpark, including a new stage and replacing the Albany Senior Center with a roofed-over market pavilion; various upgrades along the Dave Clark Riverfront Path, and sidewalks and street trees along all of Water Avenue.

CARA had expected to spend a big part of its remaining spending authority of $22 million on this project and then go out of business. Since then two other big projects, converting the former Wells Fargo branch downtown and restoring the former St. Francis Hotel, have run into delays, and it may be that they’ll require more CARA help than anticipated to make them happen. If so, that could mean the waterfront vision has to be scaled back.

The council agenda gives no details of what the discussion Wednesday is supposed to achieve. How that fits in with the city’s interest in transparency is hard to see. Maybe they just want everybody to be surprised by what comes up. (hh)

7 responses to “Scale back the Albany riverfront project?”