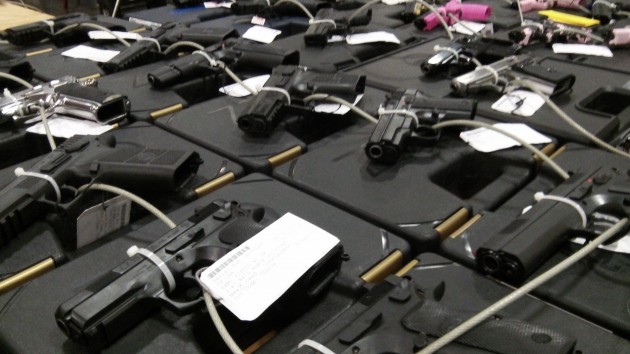 At shows like this and dealers, background checks are already routine.

Now that Senate Bill 941 has been introduced, calling for expanded background checks in gun purchases, citizens may wonder what the fuss is all about. If you accept the idea of background checks of gun buyers — and the requirement has been in effect and widely followed since 1998 — then this bill presents no great departure from what millions of law-abiding gun buyers have been doing all along.

The fuss, to make a long story short, is that this approach to crime prevention is not all that effective. If it were, drug gangs and others with criminal records would have no access to firearms. And yet the local papers often print reports of guns seized in drug raids and of felons being charged with having guns.

Ineffectiveness, though, is no reason not to have a law. Nobody would want to repeal the law against drunken driving even though it is often violated, with sometimes deadly effect. The National Instant Criminal Background Check System (NICS) conducted more than 21 million background checks on gun buyers in 2013. Of those, the system issued 88,203 denials. And since the system was activated on Nov. 30, 1998, the number of denials through the end of 2013 was 1,075,781.

Nobody knows how many of the thwarted buyers then stole guns instead or got them in some other illegal way. But the numbers show that the system does identify ineligible people trying to buy guns. So what’s the logic behind exempting any type of gun transaction?

Senate Bill 941, introduced on Thursday and being rushed through the state Senate Judiciary Committee with one scheduled public hearing  April 1 and a work session the next day, removes the illogical exemption for private sales.

It also makes the change easy. If you want to sell a stranger a gun, under the bill you take the buyer and the gun to a licensed dealer who, for a “reasonable fee,” will make the required call to the state police. This is no hardship. For any gun enthusiast, requiring a trip to a gun store is like forcing a kid to visit a toy store.

The bill also takes care of objections previously raised. For transfers to family members out to nieces and nephews, no background check is required. Nor is it required for inheriting guns or for the temporary loan of a weapon, such as on a hunting trip or at a shooting range.

Yes, this bill would be no more effective than the background checks and many other laws already on the books, but neither would be it be less effective. And it would still be helpful if its backers could come up with tangible facts, such as the number of private sales leading to harm.

With or without facts, Democrats in the legislature will pass this bill into law, and Gov. Kate Brown will sign it. But it won’t be the end of the republic, or of our freedom to own guns. (hh)