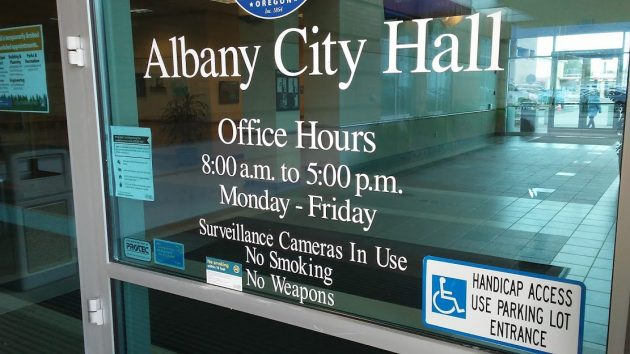 “No weapons” said the door before Covid, when the public still had access to City Hall.

A year ago the Albany City Council considered a gun issue and then dropped it. Now guns may come up again, in an entirely different context, if the Oregon House goes along and passes Senate Bill 554.

The bill would allow local governments and schools to ban guns from their premises, which many already do. But there’s an exception for people with concealed handgun licenses. SB 554 would allow local jurisdictions to cancel that exception so that, if CHL holders are caught carrying on their properties, they could face a potential felony charge.

Assuming the bill passes, city councils and school boards everywhere will be challenged to make use of it and extend their gun bans to CHL holders.

In February 2020, the Albany council voted 5-1 to draw up a resolution supporting the Second Amendment and opposing restrictions judged to be unconstitutional. The idea generated a flood of opposition, and on April 8 last year the council put off any action as long as it had to meet virtually on the internet.

Now the council has four new members. And under SB 554, again assuming it will become law, the council will no doubt be asked whether it wants to include CHL holders in the gun ban on city property.

After the bill cleared the Senate on Thursday, 16-7, Senate Democrats said in a press release their votes would “protect students, public workers and communities from gun violence.”

In Albany, nobody knows if anyone entering City Hall, whether a CHL holder or not, is carrying a gun or other weapon. Unless metal detectors are installed and staffed, the same would be true if the council enacts the ban envisioned by the Senate bill. (hh)