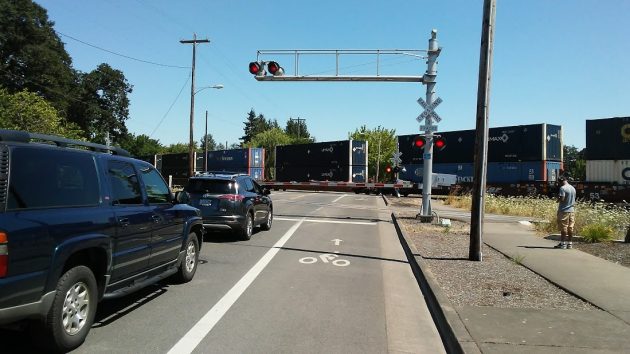 A Union Pacific “Stacktrain” passes the Santiam Road crossing in Albany on July 25.

Here’s another reason to welcome double-stacking of containers on Union Pacific’s mainline through Albany: Think of the additional congestion prevented on Interstate 5 that the trains represent.

As frequent freeway travelers know, traffic is getting heavier all the time, and not just in summer when swarms of tourists towing RVs add to the load. And think of how much worse conditions on I-5 would be if the freight carried by the UP had to be transported on trucks instead.

I snapped this photo about two weeks ago while stopped, on my bike, at the crossing on Santiam Road. The frame shows 12 40-foot containers. I didn’t count all the cars, but I would guess the train was at least 10 times as long as the segment shown in this frame. That would make about 120 containers speeding their way south. If there are 10 trains like this per day, we’re talking about a volume of freight that would otherwise go on 1,200 trucks.

As it is, long lines of 18-wheelers rumble up and down the freeway these days. Add another thousand or two every day, and you can imagine the effect on other traffic.

Adding lanes to the freeway would help, but it’s not going to happen on the long stretches of rural I-5 from Albany south to the California line. So we ought to be glad for every double-stacked UP train we see carrying part of the load of West Coast freight. (hh)


3 responses to “Saving space on Interstate 5”