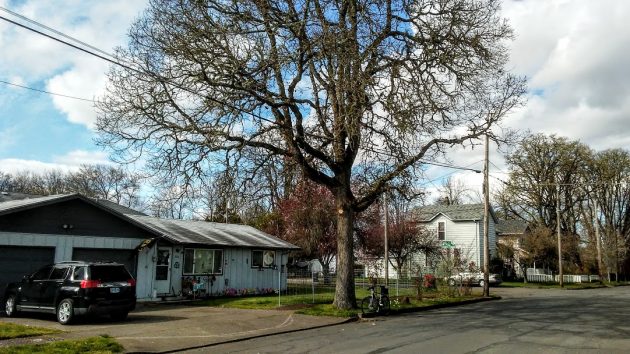 A big white oak in the 200 block of Oak Street N.E. on Wednesday afternoon.

Yesterday’s story about trying to preserve Albany’s remaining Oregon white oaks prompted a reader to ask about one such specimen on Northeast Oak Street. The bike took me there to take a look.

In case you missed her comment about that tree in the 200 block near the river, Ginny Jordan asked: “What about an old oak that’s ruined the sidewalk (people have tripped and fallen) and the tree is covered in moss and loses huge limbs all year long? It looks like crap!”

Here’s a closer look. The walk doesn’t look nearly as much like a roller-coaster as some sidewalks elsewhere in town, does it? 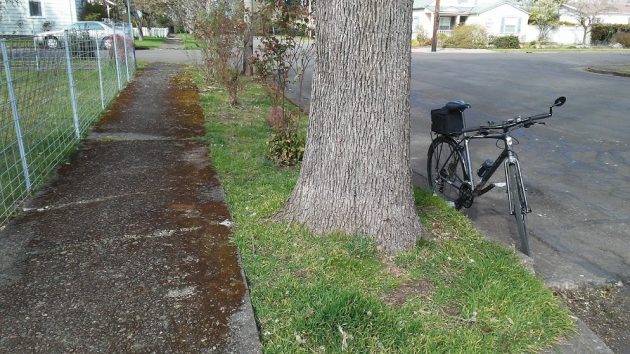 I asked Rick  Barnett about this. He is Albany’s park and facilities maintenance manager and city forester.

“The white oak in the 200 block is a sorry problem,” he replied. “It is a really nice tree but is messing with the sidewalk etc. We are working with the property owner to see what we might be able to do.”

One option might be to reroute the sidewalk. But, Barnett says, “in the end it may have to come down.”

In the next block closer to the river, three oaks had recently been cut down: 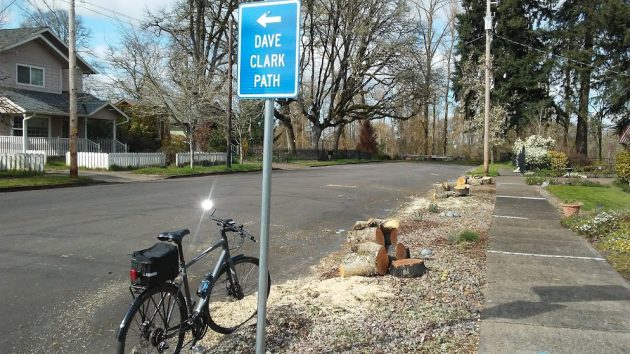 And since Barnett and Community Development Director Jeff Blaine on Monday had talked to the council about ways to save white oaks, I asked about that too. Turns out that these three were not white oaks but pin oaks, as far as Barnett recalls.

“They weren’t of high value,” he says, and the “street department removed them to work  on (the) sidewalk.”

It may be hard for the layman to see why the sidewalk needs work on a dead-end block with only two houses. But at least the oaks were not the kind that the city is trying to save. (hh)