Saved by the Russians? 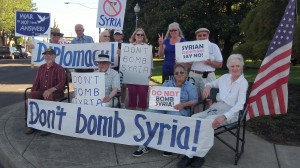 Whatever else was going on with Syria and the world on Monday, the idea of a punitive U.S. missile strike seemed to be off the schedule for now. CNN reported that on the phone Secretary of State Kerry had told the Russian foreign minister, who had brought up the idea, that the U.S. would consider not bombing if Syria hands over its chemical weapons to international authorities. Russia then made such a proposal public, and President Obama said it’s worth considering if it’s real.

It all sounds like a lot of shadow boxing to me. For a couple of years Obama has been back and forth on what if anything the United States should do about the Syrian civil war, including the apparent use of poison gas there. No wonder a majority of the American people, according to polls, oppose a campaign of missile bombardment that clearly could only make the situation worse.

Now the president is off the hook while the Russian initiative is explored. It’s always more palatable to the public and politicians to keep talking instead of doing anything. In the current case, a U.S. attack on Syria did not look like a good idea to hardly anyone — including nearly a dozen Albany demonstrators at Fourth Avenue and Ellsworth Street Monday afternoon. And Obama is off the hook on which he had managed to hoist himself.

But the memory of this episode is not gone. We’ll remember an indecisive president rescued — for now — by a Russian initiative. That’s the memory that stays. (hh)