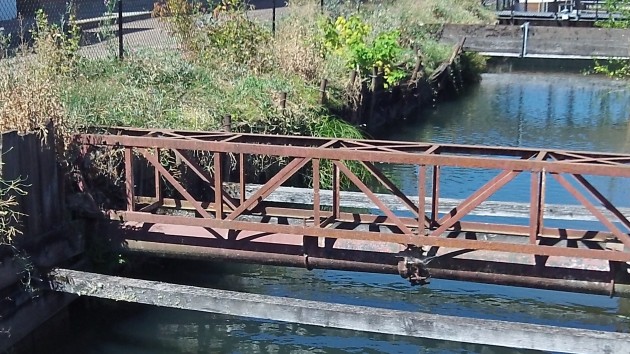 This segment of the Santiam Canal in downtown Albany is in poor shape and needs to be repaired.

A boat, they say, is mostly a hole in the water into which to pour money. At times the Santiam Canal must seem like that to the city of Albany.

In 2005 and ’06, Albany spent millions upgrading the canal’s head works on the South Santiam River. Since then it has sunk money into repairs the banks and dredging portions of the canal’s 18 miles from the Lebanon Dam to the Vine Street water treatment and hydroelectric plant. It also spent $1.6 million to install a new generator in 2008. 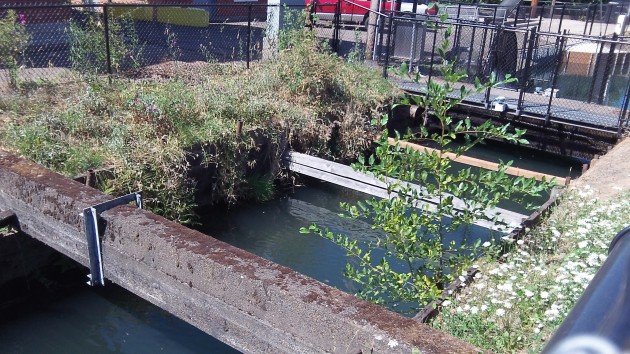 Braces keep the banks from caving in.

Now the latest chapter: Timbers that keep the banks from falling in on a downtown segment of the canal are failing, and the city has called for bids by Sept. 9 to make repairs. The problem between Third and Fourth Avenues, and repairs are estimated to cost around $170,000.

Meanwhile, talks continued last week between Albany and Lebanon on Albany’s attempt to recover from Lebanon some of the costs of the intake work. Albany started out demanding that Lebanon pay half of the dam reconstruction and fish screen and related work at the head of the canal, as well as half of a flow control structure, plus all of a new structure to control flow to a proposed new Lebanon water treatment plant, all of it adding up to $3.8 million. Lebanon offered to pay not 50 percent but 3 percent of the capital costs based on the percentage of the canal flow that it uses.

Lebanon reports that Albany has reduced its request to $2.2 million or one-third of the capital costs. As an alternative, Albany proposed that the cities commission an analysis by a third party of the costs Lebanon is avoiding by continuing to draw its water from the canal rather than building a new intake on the Santiam River itself. Albany argues that Lebanon would have to bear all the costs of a new intake and this would make Albany’s cost-sharing proposal seem more attractive to the smaller city. Albany also wants Lebanon to consider what it would have to pay to handle storm runoff if it were not for the canal, which now receives the runoff and carries it to Albany.

Lebanon will consider its answer some time this week. (Maybe Lebanon could say, among other things, “We give you runoff to help power your generator, so you owe us.” No, maybe not.)

The city of Albany owns the canal, Pacific Power having unloaded it in the 1980s when the power company got out of the water business. Lebanon has a water right on the South Santiam River, but its legal intake point is on the canal. Lebanon wants to build a new treatment plant, but Albany has refused to allow a new intake until Lebanon agrees to share in the capital costs Albany paid in 2005 and ’06.

All of this is overshadowed by the fact that except for the weeks of highest demand in the summer, Albany doesn’t need the canal at all. Almost all of its daily water needs are met from the Scravel Hill plant that Albany built with Millersburg. When the canal head works were rebuilt at a cost of $4.4 million (the amount reported at the time), the most proximate justification was that it was required by the federal license to restart electric generation at the Vine Street plant.

Only later — after it became obvious that this huge expense made the hydro project hopelessly uneconomical — did I hear the city say that the improvements would have been required even without the hydro license. But they would not have been required — and Albany ratepayers would not have to pay for them still — if the city had shifted its water supply entirely to the $30 million new plant on Scravel Hill. That could have been done. It wasn’t done in order to keep the canal going as a backup, despite its various problems, and to generate a little power from that new 500 kilowatt turbine. (To be fair, writing editorials in the local paper at the time, I strongly supported the new generator, mostly for historical reasons, even though it will probably never pay.)

With that history, it’s understandable that Lebanon is balking at being hit with a big bill for spending decisions Albany made a decade ago. (hh)


One response to “Santiam Canal: Where dollars flow”