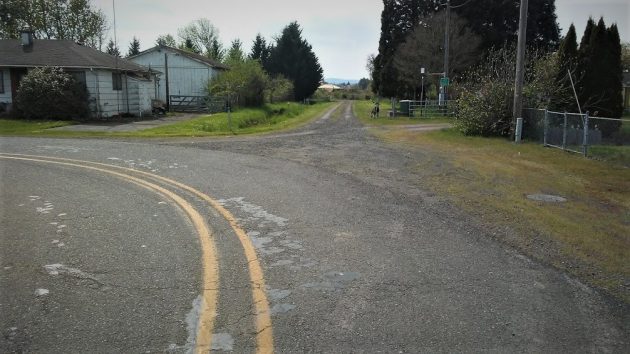 From here, the corner of Charlotte Street and Santa Maria Avenue, the city is extending Santa Maria straight west toward the new subdivision on Somerset Drive in the distance.

It had been a while since I last visited Draperville in Albany’s northeast corner. The bike took me there this week for a look at where the city is building a new street.

On Wednesday the city council awarded a $1.8 million contract to extend Santa Maria Avenue westward to link up with Somerset Drive, where dozens of new houses are springing up. The contract went to Kodiak Pacific Construction of Tualatin, whose bid of $1,851,622 was the lowest of six.

The job calls for about 650 feet of new street and storm drains, including a 60-foot bridge across a seasonal overflow channel between Truax and Burkhart creeks, plus new water and sewer lines.  Under the city contract, work is supposed to start after June 1 and be completed in 150 days but no later than Dec. 13. 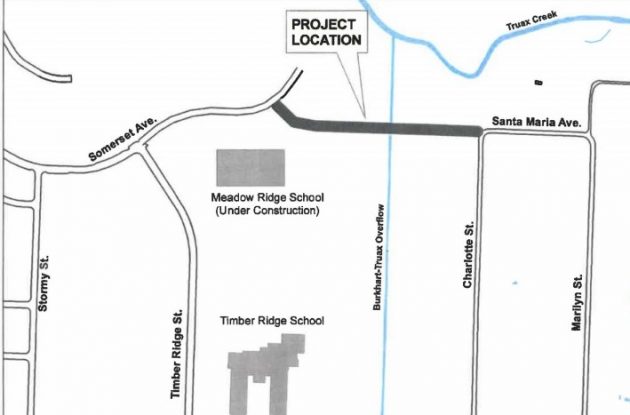 The new street will give Draperville kids a shortcut to the Meadow and Timber Ridge schools.

(Draperville, by the way, is what they’ve always called the neighborhood north of Knox Butte Road around Charlotte and Marilyn Streets and Santa Maria Avenue. It’s not an official name, but it does show up on Google maps.) 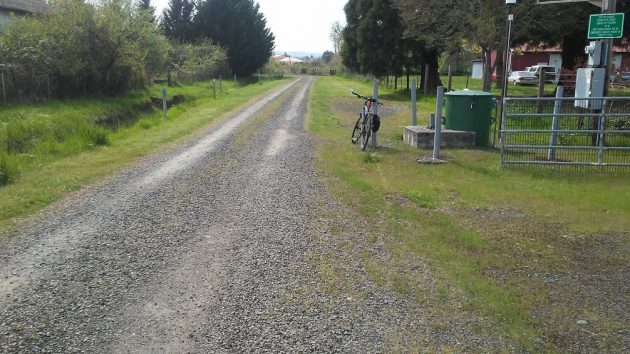 The project will allow the city to abandon the Charlotte Street sewer lift station, that green thing to the right of the bike.

The city and the Greater Albany Public Schools are sharing the costs of the street extension. That’s because the street was required for the construction of Meadow Ridge School, now under way, and the city was interested in improving the utility systems in that area. City Engineer Staci Belcastro told me that under an intergovernmental agreement (IGA) with the city, GAPS’ contribution towards street and stormwater improvements is $950,000.

However, she adds, the schools’ final contribution may be less. “We won’t know the final cost until the project is complete, but there should be savings since the bids came in lower then what was estimated in the IGA.” (hh)

A word about street names: It’s not clear whether Somerset N.E. is an “avenue” or a “drive.” The city’s map above calls it an avenue, but the signs on the street itself say it’s a drive.


2 responses to “Santa Maria Ave.: A shortcut to new school”