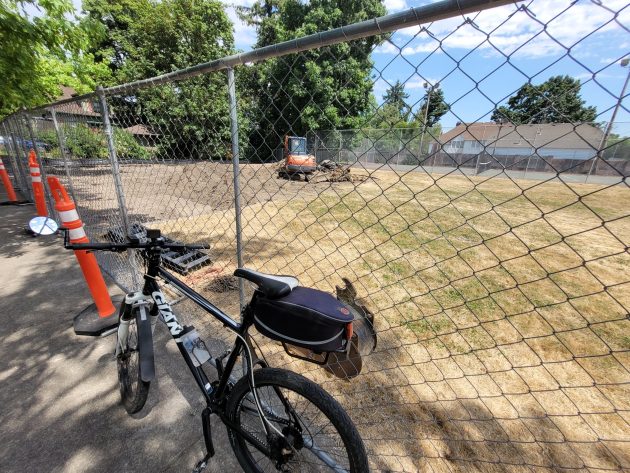 Monday afternoon at Henderson Park, where old playground equipment has been removed and excavation for improving the park has started.

If you pass the 800 block of Calapooia Street, you’ll see that work has begun on the Albany Parks and Recreation Department’s project to update Henderson Park. But because of the usual suspect — supply chain issues — it will be a while before anyone plays on new equipment there.

Monday I heard from Rick Barnett of the parks department. “Several of your articles of late have talked about supply chains being slow,” he said in an email.  “Here is another.”

The city’s contractor for the site work at Henderson Park is Petrichor Constructors LLC of Junction City, which submitted the lowest of three bids at $128,567. (The price does not include playground equipment or site fixtures, which the city is buying separately.)

“So the project will look partially done for a period of time.”

Other park projects are affected by similar difficulties.

Barnett said the city is having trouble getting tennis court companies to bid on resurfacing the courts at both Henderson and Burkhart parks.

And as for the planned “fitness court” at Burkhart Park, the parks department has asked for bids to build a 40-by-40-foot concrete pad on which to place the equipment. Barnett says he’s not optimistic of getting reasonable bids for that project either.

Looking at Henderson Park on Monday, I saw the tall old slide lying off to the side, and I wondered what happened to the other, smaller slide and the set of traditional see-saws that used to make the city nervous because of the potential for kids getting hurt.

Turns out the small slide was given to someone who used to play on it as a child, and the set of teeter-totters went to someone else for his family’s use in his backyard.

“We couldn’t sell them for liability reasons,” Barnett told me. So the items went to the first people who asked. (hh) 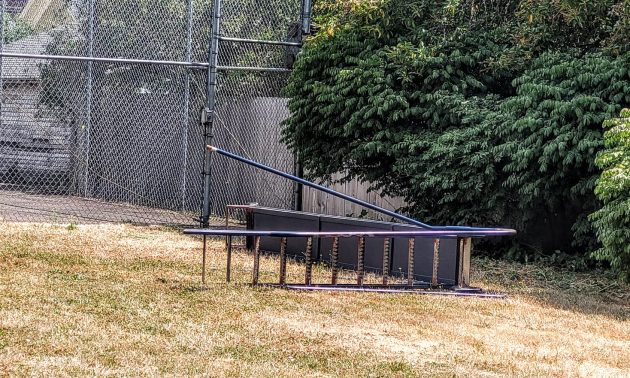 One of the two old slides being replaced with new play equipment at Henderson Park.