Written May 6th, 2015 by Hasso Hering
Comments: one response.

Albany’s Waverly Lake isn’t very big — about five acres — but it’s big enough for sailing, especially if you sail your little sloop via radio control from the dock.

From my bike on a ride Wednesday afternoon, I saw the little craft heeling under a puff of wind in the middle of the pond. And I soon spotted the skipper as he had the boat fighting to make headway in the gusts produced by strong but variable winds. He turned out to be Jeff Wagner, who lives in Corvallis and works in Millersburg. 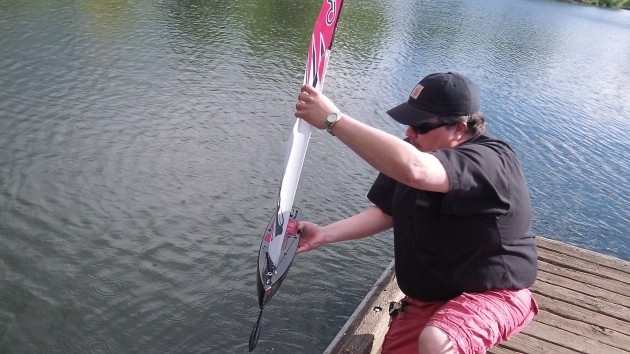 The skipper and his craft on Waverly Lake Wednesday.

He told me he would like to see some competition out there on the water. And indeed, Waverly Lake is just about perfect for radio-controlled races or just leisurely tacking back and forth with radio-controlled sailing vessels. Except at its upper end, it’s deep enough to accommodate the necessarily deep keels of model sailboats. And it small enough so the boats can’t get out of range of the hand-held transmitters.

The boat in the water Wednesday is 65 centimeters long. That’s a little more than two feet, and the keel was just about that deep, enough to keep the boat moving under the pressure of its jib and mainsail. From the shore, the skipper controls both the rudder and the trim of the sails, enabling the boat to move on all points of sail — as long as the wind blows.

It looked like fun. The only thing better would be to be able to lean out on the windward rail with a hand on the tiller. (hh)


One response to “Sailing fun on Waverly Lake”