RR bridge could use a facelift 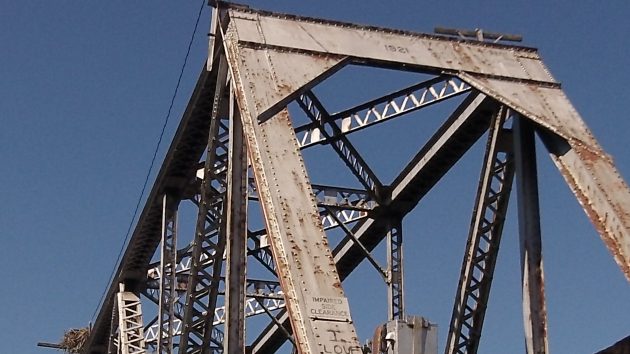 You can just make out “1921” on the cross piece at the structure’s top.

The Portland & Western Railroad is asking people to let the company know if there are any problems at the point where its Willamette River bridge also crosses the Dave Clark Path. I haven’t noticed any problems, let alone emergencies, but a suggestion regarding the bridge itself might not be out of place. 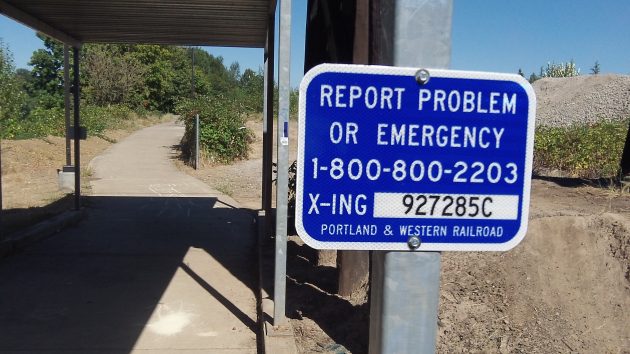 I first noticed this sign on the Dave Clark Path a couple of weeks ago.

The railroad bridge across the river, if we are to believe the year shown at the top, was built in 1921. That makes it the oldest existing Albany bridge across the Willamette, predating the Ellsworth Street highway bridge by about four years.

The railroad bridge was constructed so it could turn on its center pylon to accommodate shipping, which evidently was still a consideration when the structure was designed a century ago. It can no longer be turned, obviously. That feature was abandoned when power or telegraph lines were strung across it. (If anyone knows when the railroad bridge was last opened to allow a boat  to pass, or just to test the machinery, I’d like to hear about it.)

In about 1998, the owner of the Willamette Queen riverboat asked the Coast Guard to order the bridge opened because he wanted to move his excursion boat from Albany to Salem during a period of high water. The request was turned down, and on the day of the trip in January 1999, the Willamette Queen slipped below the rigid railroad bridge after lowering its decorative funnel.

There’s no indication that the useful life of this bridge is anywhere near its end. In fact, a few years ago ODOT granted the railroad several million dollars to replace the wooden trestle leading from the crossing toward Spring Hill Drive and on to Corvallis and Toledo. So the bridge remains a vital link in Oregon  rail transportation, as shown here: 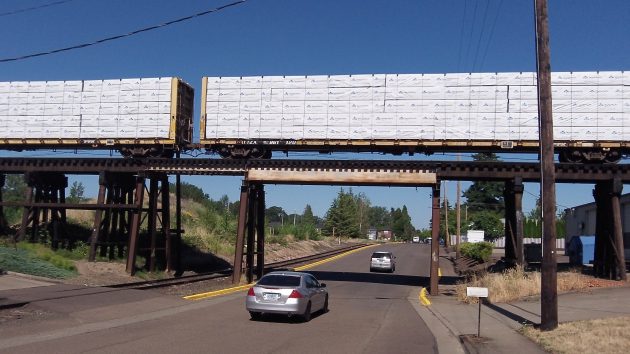 Finished lumber made by Georgia Pacific has just crossed the Willamette River.

And as a vital rail link, it might be a good idea — to finally come to the modest suggestion I mentioned above — to give the superstructure a new coat of paint so it won’t start rusting away. (hh)


5 responses to “RR bridge could use a facelift”