Roundabout: no wall or fence 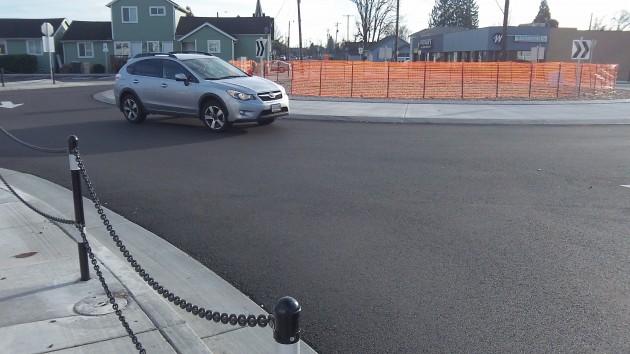 That orange plastic will go when landscaping is installed.

You can quit worrying about fancy embellishments at the roundabout completed last year on Albany’s Main Street. The advisory board of the Central Albany Revitalization Area Wednesday unanimously accepted a staff recommendation to spend no CARA money on the place.

As a result, the center island will get simple landscaping similar to that on the traffic circles on North Albany and Knox Butte roads.

Kate Porsche, urban renewal manager and economic development director, told the board the nearly $130,000 cost of previously proposed features — a circular wall and wrought-iron fence along with signage — was not worth the benefit of these additions. Her message: If CARA wanted to spend that amount, there are other ways that would do more for the Main Street neighborhood.

Councilor Floyd Collins suggested that for him, the subject was now closed and he would not want the board to change its mind some months down the road.

The way Porshe was talking, it looks as though roundabout landscaping will be installed this spring, along with other plantings in the Main Street reconstruction project. So now, maybe we can just drive around that island without fretting about the city wasting money on frills. (hh)


5 responses to “Roundabout: no wall or fence”