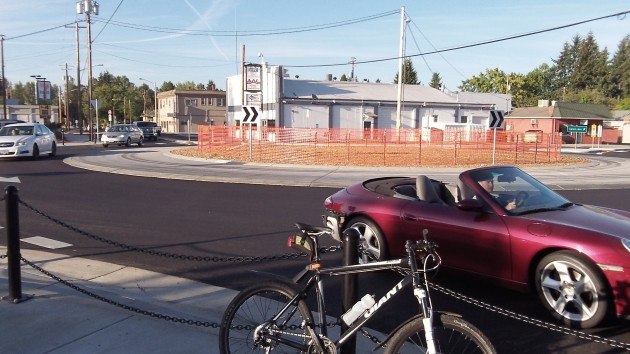 The orange construction screening in the middle of Albany’s newest traffic circle may look kind of fetching, but as you suspected it is not the final answer. City officials have been giving some thought to what should go in the center of the new roundabout at Main Street and Salem and Third avenues. But don’t worry. It’s not going to be some piece of public “art.”

The advisory board of the Central Albany Revitalization Area talked about this at their last meeting, on Sept. 18. They reviewed three recommendations from Kate Porsche, the urban renewal and economic development director, for what should go in the middle island of the circle: Some kind of art, a lighted sign, or just landscaping.

To the relief of everybody including Porsche, the committee nixed the art idea. The problem with public art paid for with public money is that while some peope may admire whatever it is, others almost always hate it with a passion. The last thing CARA needs is a public spat about spending money on what critics would surely regard as “so-called art.”

Instead, the CARA board favored the idea of one or more lighted signs set against a masonry or concrete base. Chances are the signs will say something like “Albany,” just to remind people driving west on Salem Avenue where they’ve arrived. Other suggestions were to highlight the central area’s historic districts. The board got an estimate that this option might cost around $50,000 for sign or signs, plus $20,000 for the surrounding landscaping. (There also was some inconclusive discussion about a flagpole and a remote-controlled halyard so no one would have to cross the traffic lane to haul the flag up and down.)

Porsche offered to come up up with some designs for the board to consider. Once the decision is made, either this month or later, it will no doubt be months before the hardware is built and installed. In the meantime, that orange thing will have to do. (hh)