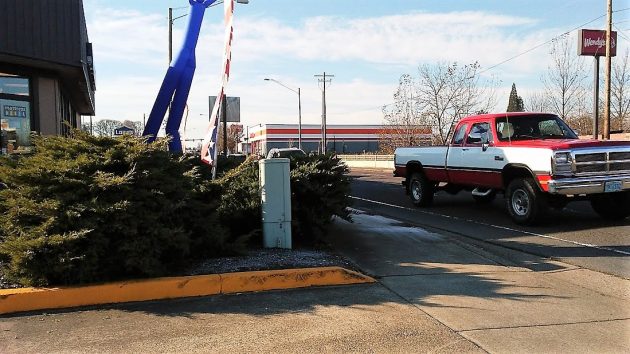 Landscaping is nice, except when it keeps you from seeing onrushing traffic.

Autonomous vehicles are the next big thing in transportation, they say. Oh really? I wonder how a self-driving car would handle a blind corner, like the one at this driveway on Ninth Avenue in Albany’s Periwinkle Plaza.

A magazine story I just read says that Waymo, a subsidiary of Alphabet, Google’s parent company, is operating several fully autonomous vans — without drivers at the wheel — in Chandler, Ariz. That suburb of Phoenix is said to be ground zero for the technological revolution that’s about to transform personal transportation.

Almost all traffic crashes are the result of human error, so it’s tempting to believe that cars that drive themselves without our help will be a big advance. The vehicles now operating in Arizona, ferrying people around town, are able to see several hundred yards in all directions at once, and of course they are programmed to observe all traffic laws at all times. Sounds pretty good.

But I’m wondering: Can they see around corners? Or, if they can’t, will they just sit in places where they can’t see and wait for a human to give them a hand? A human would take a chance and nose out into traffic. But driverless cars would have to be programmed to take no chances at all.

I would guess that the computers in autonomous cars know all the streets, just like the current GPS-based systems. Would that really work? The other day I discovered the mapping app on my phone and asked it to give me a route to town. The route it chose would have had me making a left turn onto Highway 20 at a time and place when that’s either impossible or hazardous. That would be no good in a car without a driver deciding to take a more sensible route.

The forecast for the valley just now is predicting freezing fog and low visibility. If you rely on a car that drives itself, would you trust it to take you to work under conditions like that?

On the busy curved part of the couplet leg of Ninth Avenue in Albany, when it has rained in the morning, the lane markers cannot easily be distinguished from the many glistening bands of asphalt used to fill cracks in the pavement. Would the sensors of robot cars stay within the lanes when they can’t tell where the lanes are?

I could be wrong, but my guess is that self-driving cars are farther away from everyday use than their enthusiasts predict. (hh)