Road user fee goes up too 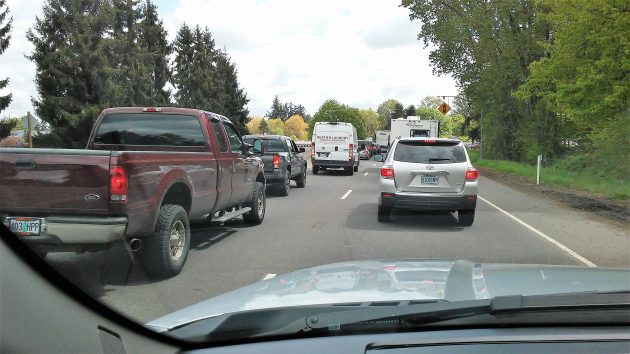 Oregon’s low-key experiment with charging road users by the mile continues, and on Monday the fee goes up in order to keep up with the jump in the state gas tax.

OReGO, as the program is called, allows volunteers to sign up their vehicles for this experimental fee. A gizmo in their cars reports how many miles they drive, and an account manager keeps track of how much fuel they are presumed to have burned. They get credit for the fuel  tax they paid, and they are charged the “road user fee,” which until now has been 1.5 cents a mile. On Jan.1, when the gas tax jumps 4 cents to 34 cents a gallon, the road user fee inches up to 1.7 cents per mile. At 20 mpg, a vehicle owner pays about the same in gas tax as the road fee. And since one offsets the other, it’s a wash.

I’ve been a volunteer in the program since it started in July 2015. Currently my fuel credit is a tiny bit higher than my road user charge. So for a 6-mile drive, the state owes me $0.0015. That’s one-and-a-half thousandth of a dollar. Big deal, right? My current balance on the truck I’ve driven since May 2016 is $4.63. The state won’t pay until the amount hits $20. At the current rate that may be in three or four years.

The idea behind all this is that the gas tax can’t keep up with the need for highway revenue as vehicles get ever more efficient and some don’t use motor fuel at all. But collecting the road fee is not cheap since it involves contracting with private companies to provide the technology. ODOT makes no effort to disclose the cost. A report on the program last April completely glosses it over, and the ODOT budget makes it impossible to find (at least for me). But it has to run into the millions per biennium, considering the contracts with three vendors and the technology, personnel and bookkeeping involved.

In addition, the federal government has given millions of dollars in grants to Oregon, California, Washington and other states to explore expanding this system across state lines.

So far the idea has not caught on among the public. The legislature authorized up to 5,000 vehicles to be signed up for OReGO, but the program reports that only 669 were active at the end of last year. And as of last June, the number was 745.

The longer I’m in this program, the more I think there has to be a simpler way. Such as: Keep collecting the gas tax for roads and raise it as necessary, and collect a proportionate mandatory annual road user fee on all vehicles that don’t use motor fuel, or use very little. That should keep things fair, and it avoids all the technological issues and administrative costs.

But Oregon seems stuck on this complicated idea, at least until the legislature finally says enough. (hh)


5 responses to “Road user fee goes up too”