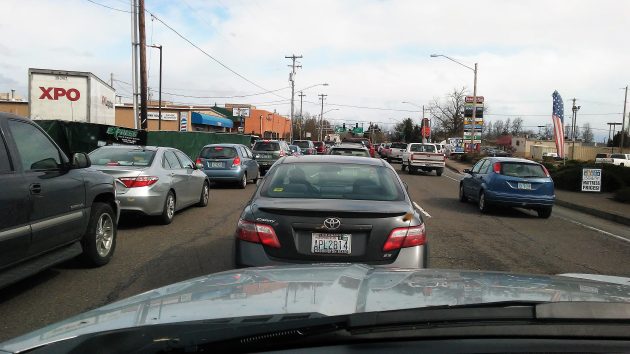 Traffic in Albany: A mandatory state road user fee by 2025 has not advanced in the legislature.

Legislators seem to be in no hurry to expand OReGO, the state’s per-mile road tax program, or to make it mandatory in a few years. A bill to do both was heard by the House transportation committee on March 15 but has seen no action since.

Only two people, representatives of Metro and AAA Oregon, signed up to testify for House Bill 2464. The ODOT manager in charge of the program also testified but said she was “neutral” on the bill.

The 2013 legislature authorized the road-user fee for up to 5,000 vehicles, and volunteers could sign up for the start in July 2015. Participation never got close to the limit. Between 1,200 and 1,300 vehicles have been signed up.

The way it works, volunteers can choose one of three kinds of gizmos to plug into a port on their vehicles. The devices record the miles driven and gallons of fuel consumed. The owners are charged a road-user fee of 1.5 cents per mile, and they get credit for the 30 cents per gallon of fuel they have paid at the pump. Once the fee or the credit hits $20, they get either an invoice or a check in the mail.

Oregon started the program because, in the words of OReGO’s Maureen Bock, the “fuels tax will no longer remain viable as more fuel efficient and electric vehicles use the roads.” And that’s why the transportation department’s Road User Fee Task Force proposed House Bill 2464.

The measure would lift the cap of 5,000 vehicles and, more significantly, make the mileage fee mandatory in 2025 for all light-duty vehicles of model year 2026 and later with a fuel economy rating of at least 20 miles per gallon. Bock told the transportation committee that to prepare for 2025, ODOT would develop a mechanism for manual mileage reporting, consider new reporting technologies, and study enforcement methods.

It’s possible that a mandatory road user fee will be included in the transportation tax and spending package the legislature is supposed to consider. But for now, lack of action on HB 2464 suggests that while the existing voluntary mileage fee is continuing — there is no end date in the law — its expansion into a requirement remains in doubt. (hh)