Road use fee, a year away 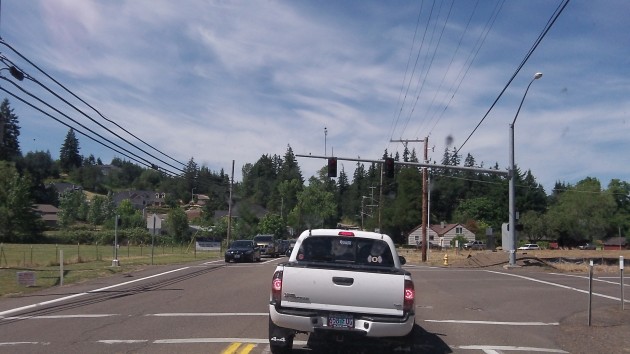 Waiting at a red light even though there’s no cross traffic at all.

There’s always talk of increasing the federal gas tax because the Highway Trust Fund is running out of money. Maybe Congress could follow the lead of Oregon and experiment with road user fees instead of fuel taxes as a way of raising money to keep our highways and bridges in good repair.

Oregon’s own departure from relying mainly on fuel taxes is still very tentative. But it could prove instructive — if it works on a large scale.

The 2013 legislature authorized what ODOT calls the Road Usage Charge Program. It allows up to 5,000 motorists to volunteer — if they qualify — to pay a road fee of 1.5 cents a mile instead of the state fuel tax of 30 cents a gallon. If these people buy gas, they will still have to pay the tax, but then they will get a refund of the fuel tax they paid.

The bill passed last year was Senate Bill 810. It calls for the road user fee to be in place by July 1, 2015. So ODOT was given two years to prepare and now it has one year left.

Owners of passenger cars and pickups will be able to volunteer for the program if their vehicles are equipped with a method of reporting “metered use” of the public road system. Several options will be available, and under the law at least one “must not use vehicle location technology.” That’s to calm people’s fears of the government tracking them everywhere they go.

As long as the program is voluntary, it doesn’t seem to make much sense in terms of raising revenue. After all, which owner of an all-electric or hybrid car (an owner who now pays litte or no fuel tax for roads), would sign up and then have to pay a cent and a half per mile?

But the idea behind all this is that sooner or later, fuel taxes will be become useless as a revenue source for roads, and then a road user charge will have to become mandatory. Oregon seems to be looking ahead to that day, when all vehicles will be taxed based not on the amount of fuel they burn but on how far they go.

Whatever you think of all this, a charge based on distance traveled has at least one small upside: No longer would we be wasting tax money waiting at signals that turn red and stay red even when there’s absolutely no cross traffic at all, which is something that often happens at one particular signal on North Albany Road. (hh)