Road-fee bill is coming up 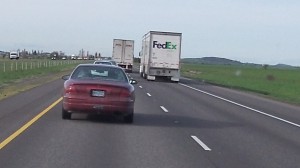 How to pay for roads when vehicle owners pay neither gas nor weight-mile tax?

After 12 years of effort, Oregon state officials are taking another stab at establishing some kind of road mileage tax for vehicles that burn little or no fuel. Many questions remain, and lawmakers now may try to answer them. On Wednesday, the House Transportation Committee is planning to act on House Bill 2453, which would authorize ODOT to set up a fee program for high-mileage motor vehicles.

The concept calls for some kind of system to keep track of mileage — in addition to the odometer that all vehicles already have. Owners could pay a fee per mile or an annual charge to make up for paying little or no gas tax for road upkeep. The fee is not specified in the bill but is supposed to be around one-and-a-half cents per mile.

If it’s enacted, it’s going to get complicated. Owners would get a decal exempting them from the gas tax, but how would that work at the pump when they do need a little gas? How would ODOT verify their mileage, especially if they want to subtract any miles driven out of state? And how would refunds be handled if an owner pays the annual fee but then drives less? More paperwork, that’s for sure.

If the transportation panel approves, the bill next goes to House Revenue and then to Ways and Means. Let’s hope they find a way to keep it simple if they do put this idea into law. (hh)

Ted Salmons: As usual.  Politicians showing they are unable to think any further ahead than than next year’s budget increases.  For decades they preached at us to buy more efficient cars, drive less, carpool, and use public transit.  Then, when people actually start doing those things and buying less fuel (admittedly more likely due to higher costs) then they shift into the “Oh my God we’re getting less fuel tax money” mode.  Work with me here people.  It’s too late for the current load of politicians but in the future, for people desiring a life in politics. If you’re that shortsighted please make an appointment at Planned Parenthood before your first Primary so you won’t breed more like yourselves.