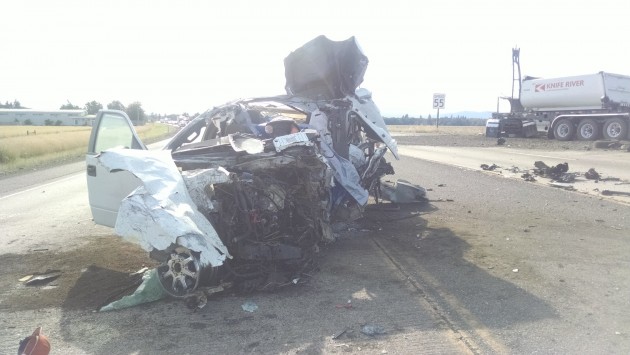 The reason the Oregon legislature could not pass a small but important gas tax increase is that it had already raised the price of fuel over the next few years, and the Republican minority in the House would not accept a double increase.

So if our highways don’t get improved as they should be — including Highway 34’s Death Alley in the mid-valley — you can blame the Democratic majority for insisting on the double increase, an increase that would hurt people in the rural areas most of all.

The transportation package that died in committee this week would have provided funds for making Highway 34 marginally safer between I-5 and Corvallis by installing a median barrier, and by easing congestion with a new frontage road near Peoria Road. With the package dead, presumably this won’t be done anytime soon because the money for it won’t be raised. Because of that and beause too many drivers are careless, we will continue to see cross-over crashes and deaths like the two on Wednesday, the same day the trasportation bill died.

The bill called for a 4-cent gas tax increase to 34 cents a gallon over two years. That was a modest proposal, and quite affordable. The low-carbon fuel programs the Democrats enacted earlier in the session most likely will raise the price far more, but that money won’t be available for roads. Instead it will go to support a complicated and rule-heavy program to reduce the efficiency of motor fuel by lowering its carbon content in order to prevent global warming, and to subsidize alternative fuels.

Oregon’s contribution to worldwide greenhouse gases is insignificant, so the Oregon expense for that program will be wasted. But in order to assure that this waste takes place, for purely symbolic reasons, environmental groups and their allies in the legislature opposed its repeal.

And that’s why the state won’t have the additional revenue it needs to take care of our roads. (hh)