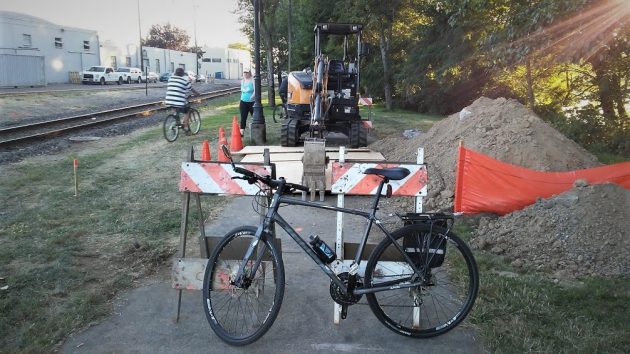 People go around a construction site on the Dave Clark Path on Thursday evening.

Now it has started — the big Albany sewer project intended to prevent overflows to the Willamette River during heavy rains. The construction will, among other things, distrupt the middle section of the Dave Clark Riverside Path, where an underground lift station or pump will be installed.

Some digging on the path has started, as people using it Thursday night discovered.

On June 12 the city council awarded a contract for the main part of the project to Pacific Excavation Inc. of Eugene, the low bidder at $7,173,075, substantially below the city engineer’s estimate of $9 million.

The job is to build the wet-weather lift station and a 7,100-foot-long, 30-inch-diamater sewer main from there along Water Avenue and then some other streets to the Albany-Millersburg sewage treatment plant. The contractor has until January 2020 to get it done.

The intent is to take some of the load off the city’s 8,700 Riverfront Interceptor during heavy rainstorms, when so much storm and groundwater infiltrates the main that it can’t handle it all, even though near its end the pipe is 54 inches across. That’s when the flow starts coming out of several overflow pipes and going directly into the river, something on which the DEQ has frowned for years.

The city’s original budget for this project was $13 million, and it got approval of a state loan for that amount. With the less-than-expected construction bid, the total estimated project cost now is $10.1 million. Presumably the city won’t draw on all of the state loan, meaning sewer ratepayers also will have to repay a smaller amount.

But for now, if you use the Clark path, expect to make a detour just about where Madison Street comes in. (hh) 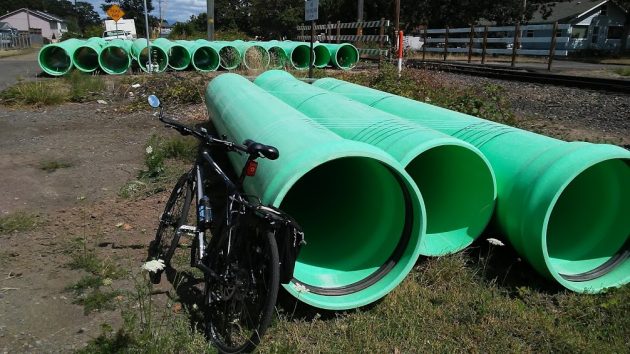 Some of the 30-inch diameter pipeline segments stored near the east end of Water Avenue on July 16.