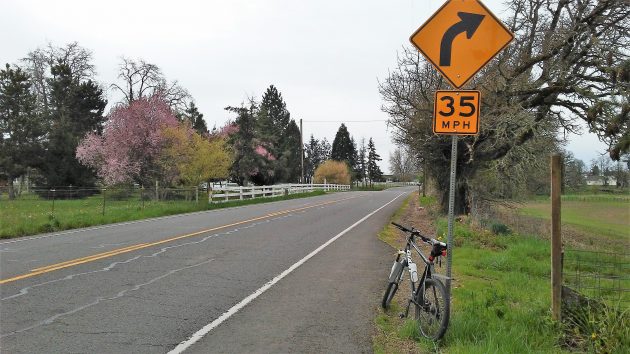 This may be the year that Linn County follows through on its plan to widen the shoulders of Riverside Drive, making it a better route for bicyclists connecting with the new path alongside Highway 34 on the way to Corvallis.

When I asked County Commissioner Roger Nyquist this week about the status of this long-standing plan, he told me that half the length of the 6-mile road — the segment closer to Albany — would be done this summer.

County Roadmaster Darrin Lane was a little more guarded. “We are planning to go out to bid fairly late in the summer so the contractor will have the remainder of this year and part of the next to get the work done,” he told me by email. “The work consists of primarily widening the shoulders, but we are planning on a significant improvement to the first sharp turn to the south. We are still involved in right-of-way negotiations for that area and will include it if possible…”

Lane didn’t yet have an estimate of the costs. The idea all along has been to widen the shoulders when it comes time to resurface the road anyway. But environmental issues, such as wetlands and archeological surveys, have complicated the widening. The taxpayer may have difficulty believing that the ditches along Riverside hold much in the nature of valuable wetlands or aboriginal artifacts. Still, Lane expects the county will have to pay more than $124,000 for wetland mitigation alone. “These are just the parameters we are working under these days,” he said.

Widening the shoulders to the right of the fog line will be especially helpful in places where now they are only a foot or two wide and there’s a deep ditch beyond the pavement’s edge.

Closer to Highway 34, the Riverside shoulders are wider already, affording a relatively comfortable bike link to and from the path along Highway 34, which ODOT completed in November 2015 at a cost of $1.1 million. This alternative will be especially useful in coming years if Benton County eventually fails to find or build a feasible Albany-Corvallis bike route on its side of the Willamette. (hh) 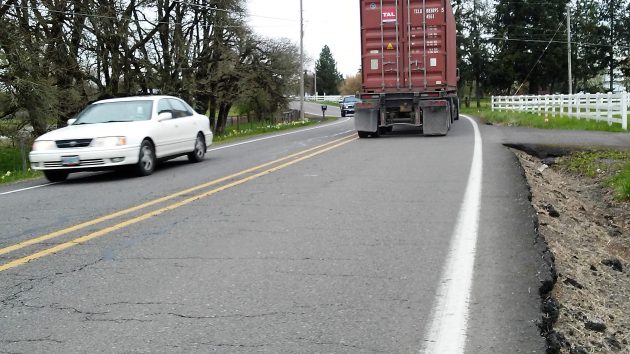 On Riverside looking north, not much room between trucks and the edge of the road.