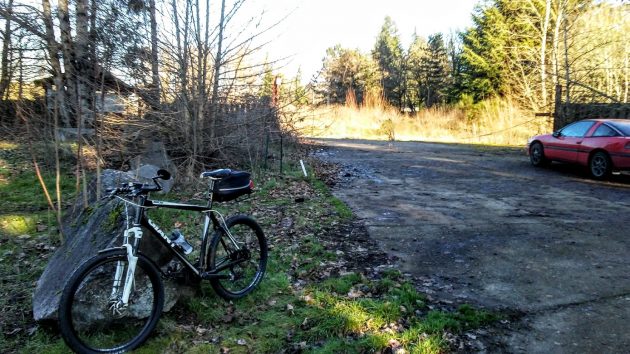 On Monday my bike and somebody’s car mark the entrance to the old Permawood site, where the city of Albany has again approved plans for 120 apartments.

It was not a surprise. The developers, Salem-based Willamette River View Holdings, earlier got the planning staff to OK an expansion to 120 units of their previously approved 105-unit plan. The planning commission, though, denied that change as a “modification,” saying it was really a new plan.

So the developers filed the same thing as a new plan, and now the planning staff has again said fine. According to a lengthy staff report, the development meets all the “approval criteria” of the city’s development code and related regulations for protection of the Willamette Greenway and development in a potential flood zone.

The plan calls for eight three-story apartment buildings and a clubhouse, plus 218 parking stalls and open areas, on little more than six acres bounded by the river, Geary Street, Linn Avenue, and Chicago and Alco streets.

On its website, the city’s planning division published its decision to approve the site plan Monday at the same time it published the fact that it had received River View’s application on Nov. 19. It did notify property owners within 1,000 feet of the application at the time and got five written objections in response.

If no one “with standing” asks for a public hearing by the planning commission by Jan. 7, the staff’s decision to OK the plan will be final “without further notice.”

For some reason — and I can’t remember what it was — this former industrial site along the river was rezoned for apartments in 2001 and 2002. What’s happening now is the result of the decision made back then. (hh)