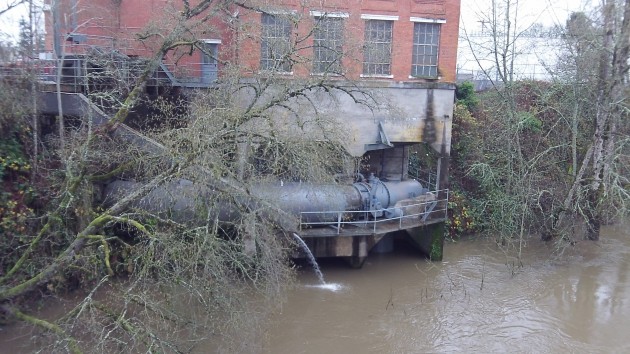 The view of the power house from the Third Avenue bridge on Dec. 15.

Trying to make money from its small hydropower generator, the city of Albany can’t seem to catch a break. Much of last year there was too little water to run the turbine, and now there is too much.

I try to keep track by looking to my right, when riding my bike up the Third Avenue bridge across the Calapooia River, and seeing if the turbine shaft is turning. On Tuesday it wasn’t. When I checked, I learned that the generator was shut down because the water level in the Calapooia was too high.

Chris Bailey, who runs the operations side of the Albany Public Works Department, explained in an email: “The generator needs a certain amount of head, which is created by the relative difference between the water surface elevation in the canal versus that in the Calapooia. When there is not enough head, the operating efficiency of the generator drops and it automatically shuts down. Once the Calapooia level drops again, we will be able to restart the generator.”

That might not be for a while, as the Weather Service predicts more heavy rain in the region over the next few days.

Last fiscal year the hydro plant had to be shut down several months for repairs on the Albany Santiam Canal and also because of low flow in the South Santiam River, where the Santiam Canal gets its water. The city sells the output of the 500-kw generator to Pacific Power, but as reported here on Nov. 26 the prolonged shutdown resulted in a loss for fiscal 2014-15. (hh)