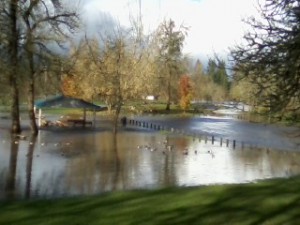 Bryant Park as seen from near the entrance on Wednesday afternoon.

Now we know it’s fall. The drive through Albany’s Bryant Park, at the confluence of the Willamette and Calapooia rivers, has been closed to motor traffic because of high water. A city worker closed the gates on the park’s entrance and exit Wednesday afternoon. Running high after two days of occasionally heavy rain, the Calapooia had spread out across part of the park. Those little specks on the water you see in this snapshot, taken Wednesday afternoon between showers, are geese and a few ducks. Closing the gates also bars access to the upper parking lot. People can still visit Bryant Park on foot, but according to signs, parking at the gates is prohibited. So park downtown and prepare for a longer hike. (hh)