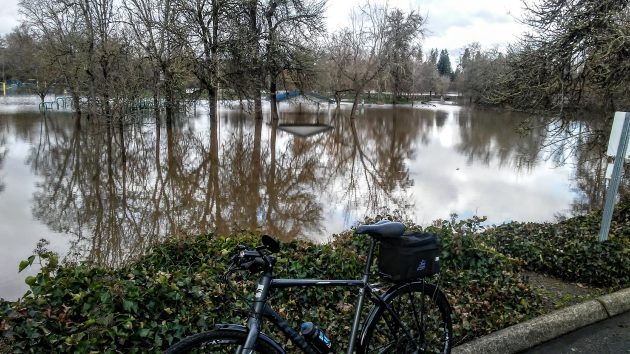 As you can see, high water in the Willamette and Calapooia rivers has once again swamped Bryant Park in Albany as it does almost every year about this time.

Lots of rain on Tuesday and Wednesday and warmer temperatures in the foothills of the Cascades caused the rivers to swell.  At the Albany gauge, the Willamette crested at a little above 18 feet at 2 p,m. today.

That could serve as a guide for future reference: If the river gets to about 17 feet, no point going down to Bryant because roads will be under water and the gates will be closed.

Just a couple of days ago I noted that, some time before, the park crew had rolled up the fences on the softball fields. Now you can see the reason why. (hh)