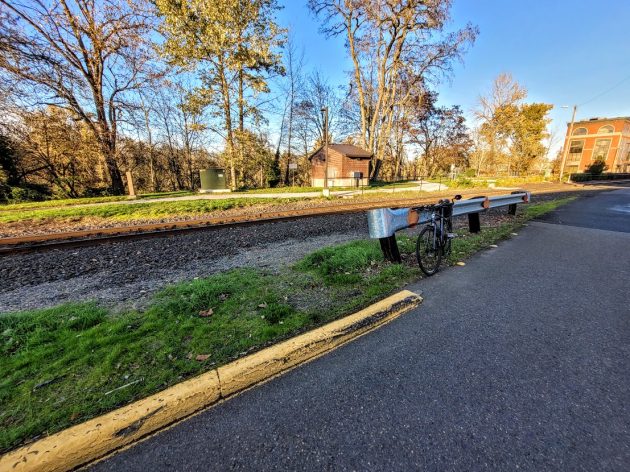 This spot on Water Avenue at Montgomery is one where the city plans to open a crossing on the railroad tracks.

Plans for Albany’s riverfront call for improving crossings on the Water Avenue rail line, opening new ones and closing others. But the new or improved crossings won’t have to be protected with automatic arms.

That’s the main new thing I got out of this week’s city council discussion of the latest update on the Waterfront Project of the Central Albany Revitalization Area (CARA), the urban renewal district.  I missed the Wednesday meeting but listened to the nearly two-hour audio recording and studied the graphics on the agenda from Walker Macy, the design firm contracted for the project.

Over the past couple of years or so the council, acting as the Albany Revitalization Agency, and the CARA advisory board several times affirmed their decision to spend most of the urban renewal district’s remaining borrowing authority on improving the riverfront and two other projects, the former Wells Fargo bank and former St. Francis Hotel.

On Wednesday the council (as the ARA) voted 5-2 to approve the staff recommendation to do the riverfront work in two phases, over two years, and to borrow the costs of both phases at once, paying them off with tax increment financing over the remaining years of CARA’s existence.

Councilors Dick Olsen and Matilda Novak objected. They wanted the entire CARA board, not just the council as the ARA, to review details of the proposal before the city goes ahead. Other council members and the city staff insisted that the project had been reviewed by the CARA board before, the decision to go ahead had already been made, and now it was just a matter of carrying it out.

Not all details have been reviewed, though. For example, Olsen did not like the idea of expensive crossing arms on a dozen new rail crossings on Water Avenue. That’s when it came out that actually, ODOT no longer demands gates on the Water Avenue line, which carries only one or two trains a day at 10 miles an hour or less.

Chelsea McCann, the chief consultant on the project, explained that “improving” the crossings meant to make them easier to use, but she didn’t say how.

The council did not go into the crossing issue further. If it had, it might have questioned the staff or the consultant on oddities in the graphics included with the agenda.

One graphic shows proposed work at crossings with a “total of 11” at an estimated cost of about $2 million.  Then it says nine crossings are to be improved and three “existing pedestrian crossings” are to be closed, presumably making a total of 12.

A different graphics says eight crossings are to be improved.

A map of the track shows where work is to be done, but not which crossings are to be improved and which ones closed.

The plan now is to start construction in 2022 on Water Avenue, including raised brick intersections like at Jackson and Hill, and to work on changes in Monteith Riverpark the summer after that.

The cost estimates are about $7.3 million for Water Avenue from Washington to Main, about $160,000 for the Dave Clark Trail, and just under $7 million for changes at Monteith Riverpark.

The Water Avenue project also includes one block of Broadalbin, evidently to extend the Broadalbin Promenade treatment from First to Water. That’s something else the council didn’t ask about. (hh) 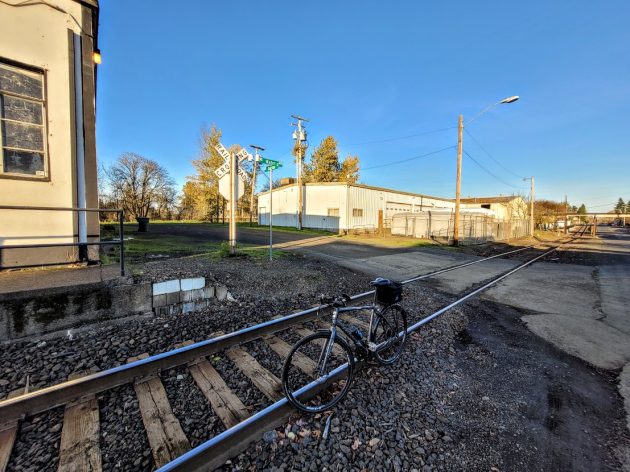 The crossing at Thurston Street is one of those to be improved.