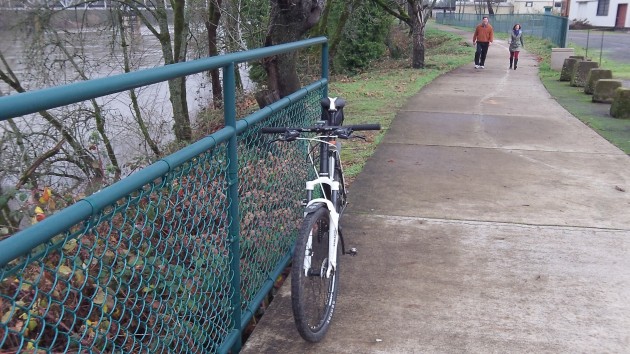 Daytime on the Dave Clark Path: Lights should encourage evening use too.

If everything goes according to plan, Albany’s Dave Clark Path will have new lighting starting next spring — at the cost of about $352,800 — and people using the place after dark will be able to see where they’re going. And if the police are called, officers will have a better view of what’s going on.

The advisory board of the city’s downtown urban renewal district approved the expenditure Wednesday. The total includes a $298,000 construction contract plus a 10 percent construction contingency and $25,000 in city engineering expenses. Four companies bid for the project. The low bidder, at $298,008, is Crawford Electric of Stayton.

Awarding the contract is up to the city council, and it will be asked to do so on Jan. 13.

Lighting the riverfront path has been a goal of the parks department and the city police, among others. “The improved lighting will make the riverfront more attractive to recreational use and make enforcement much easier,” a staff memo to the city council says.

The path runs along the riverfront from Monteith Riverpark to where it feeds into Front street at its eastern end. Most of the path has no lights. And the lighting in the park is dim and, according to the staff, hard to maintain because of its age.

Chris Cerklewski, the city engineer in charge of the project, says the new lights will be on timers. The CARA board had approved the project back in March, and now that the bids are in, the board has affirmed its support. (hh)