Written May 3rd, 2018 by Hasso Hering
Comments: one response.

It took some hard work by the Albany parks crew, but now the new floating dock at Takena Landing on the Willamette River is in the water, ready to be used.

The parks crew spent much of Wednesday on the installation and finished up this morning. By the time I went by there at mid-morning, they were done.

The new floating dock replaced one that was more than 20 years old. It’s made of aluminum and fiberglass.

To get this done, the Oregon State Marine Board gave Albany a $118,000 grant. Together with related expenses, the city figured last year, replacing the old float with its wooden deck would cost about $151,000.

The new dock is sturdy and slip-resistant, and the deck won’t splinter.  It looks like it won’t have to be replaced for a good many years.

Too bad there wasn’t a better place on that stretch of the river to place a boat ramp and dock. The strong current perpendicular to the angle of the dock makes launching and retrieving boats there more of a chore than it needs to be.

If you’re navigating in a canoe or some kind of float, you’re probably better off launching or landing on the beach of Bryant Park, on the river’s opposite bank. (hh) 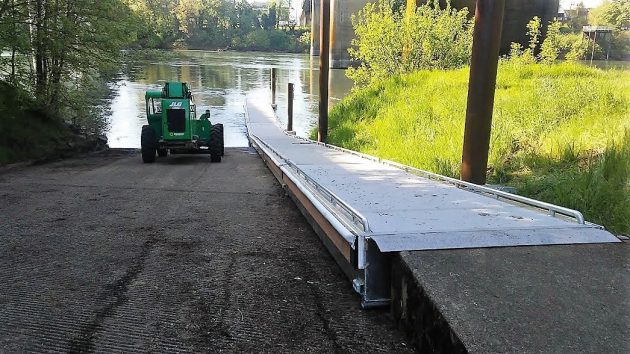 The new dock on Thursday morning.


One response to “Riverfront news: Takena’s dock is ready”