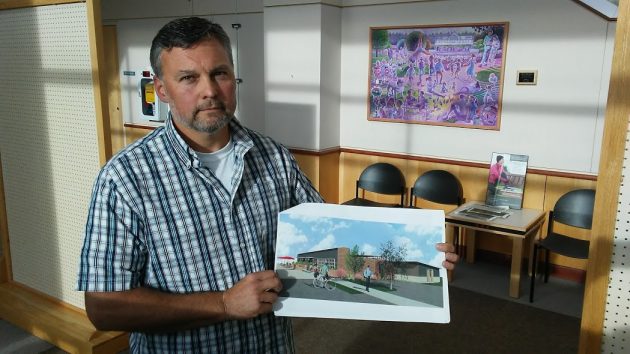 Calvin Bontrager with an image of what he’d like the outside of the “Albany Garage” to look like.

The one-story building at the southeast corner of Water Avenue and Hill Street doesn’t look like much. But it could become an attraction on the Albany riverfront if a contractor carries through with a concept he showed the downtown urban renewal board last week.

Calvin Bontrager owns the general contracting company called JDR for “Just Done Right.” He is leasing and intends to acquire the former garage at 135 and 139 Hill St. N.E., which county tax records say was built in 1940.

His concept, as he explained to the advisory board of the Central Albany Revitalization Area on Wednesday, is to turn the place into a smaller version of Seattle’s Pike Place Market. He would call it the “Albany Garage.”

Inside the remodeled building, Bontrager envisions a large open space with seating and a see-through fireplace surrounded by four shops for artisans (he mentioned a glass blower), a couple of offices, an indoor food truck, two offices, a public restroom, and space for an all-year farmers’ market. He showed the CARA board drawings and illustrations done by Albany architect Don Johnson.

One hurdle is parking. What parking is available in the area is usually taken up by customers of the Calapooia Brewing Co. across Hill Street. But there’s an unused parcel of city-owned land in the middle of the Edgewater Village development across Water Street. The city obtained the land several years ago as part of a franchise agreement from the BNSF railroad, and Bontrager now hopes the site will become a parking lot. Not having parking available, he told the CARA board, would be a “deal breaker” for him.

Bontrager hopes for help with his project from CARA, but he hasn’t yet filed an application. His informal presentation, though, got a favorable reception. “This is really exciting,” said Mayor Sharon Konopa, who was happy to see someone willing to invest in the riverfront area. (hh)

The story has been edited to use the proper term for that Seattle market. Thanks to the commenters below who had a fit because the original mistakenly added an apostrophe and s to the name.

The old garage is across Hill Street from the Calapooia Brewing Co., a popular restaurant.