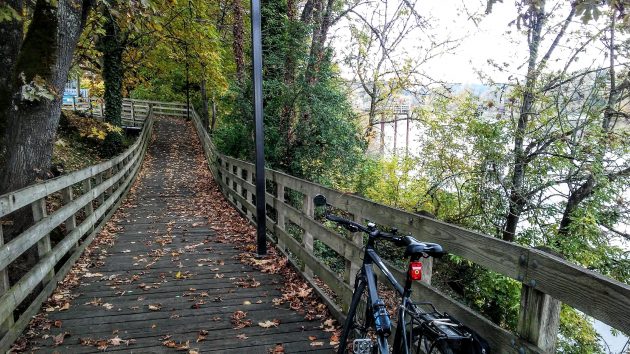 This boardwalk, part of Albany’s Dave Clark Path, was built to skirt a restaurant that perched on the Willamette riverbank below the Ellsworth Street Bridge. The restaurant burned down years ago, but the path still winds around where it sat.

The little boardwalk is just one feature of the riverfront, a landscape that will likely see big changes as the city goes ahead with a multimillion-dollar urban renewal initiative. The idea is to redevelop the area along Water Avenue from Washington Street in the west to Main Street in the east.

The CARA advisory board and the city council, acting as the Albany Revitalization Agency or ARA, on Wednesday will be asked to approve a $2.36 million contract with Walker Macy, a Portland firm.

“This contract will formally begin what is expected to be a year long process of design, community input and engineering that will result in buildable plans, a funding strategy, required permits and the realization of a long-standing community vision,” economic development manager Seth Sherry said in a memo to the advisory board.

The money would come from ARA’s capital projects reserve, which has $4.34 million in the 2019-21 biennium.

The CARA board meets at 5:15 Wednesday in the council chambers at City Hall. The council/ARA meets when the advisory board is done, to act on whatever the board recommends.

The agenda includes letters of support for the riverfront initiative from the Albany Chamber of Commerce, the Albany-Millersburg Economic Development Corp., and the Albany Visitors Association.

The price tag of whatever public improvements result from the design and planning process is undetermined and depends, obiously, on the details of future decisions. CARA has talked in terms of $20 million, in that neighborhood. The ARA would borrow the money and pay it off from property taxes on the value increase of the downtown urban renewal district since it was formed in 2001.

The riverfront initiative is intended to be CARA’s last major project. When it’s paid off, CARA is done. (hh)

13 responses to “Riverfront design contract up for CARA action”