Riverfront beat: No place for naps 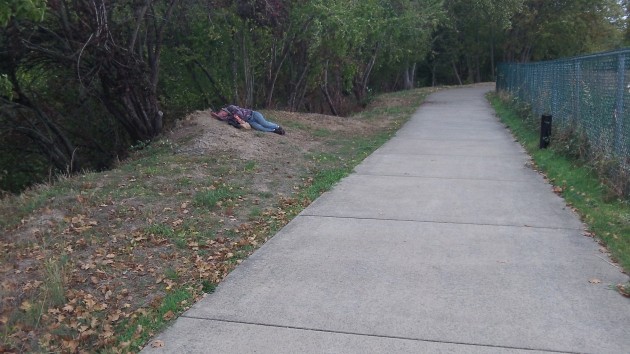 He’s getting some rest alongside the Dave Clark Path.

Sooner or later, I thought while riding my riverfront beat on Saturday, efforts to revive Albany’s riverfront will have to deal with the question of how to attract more customers, residents, visitors and even home buyers to a place where the homeless often hang out.

The city is about to go out to bid for a lighting system along the riverfront Dave Clark Path, a system that should be installed by the end of the winter. That will help, no doubt, at night. But what about during the daytime when the weather is nice, as it was Saturday morning before the long-awaited arrival of rain?

Edgewater Village is trying to sell the first five new homes in the development and is supposed to build, by a deadline next year, the next batch facing the riverfront path. How many potential buyers will overlook a man dozing on the porch of one of the vacant new houses? Or a guy taking a mid-morning siesta across the path from the sites of prospective new homes?

Taking a nap is doing no harm, and a tired man without a place to stay has to sleep somewhere. But he doesn’t necessarily contribute to the ambience that buyers of $255,000 houses want.

Winter weather will put an end to this sort of thing, probably. But with any luck the warmer seasons will come around again, and then what? The city has put up signs hoping to discourage squatting on the riverbank, but signs are not likely to be enough. More patrols by law enforcement might help, and if that’s impossible for staffing reasons, then trained volunteers might be induced to keep an eye out.

Or we wait for the general public to start using the path and its environs in much greater numbers, thus making squatters look for places less busy, places where nobody will bother them or care what they do. But that could be a very long wait. (hh) 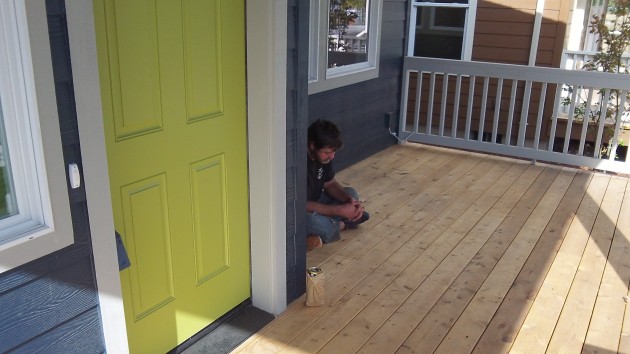 A would-be home buyer would have met this unfortunate fellow Saturday.


10 responses to “Riverfront beat: No place for naps”