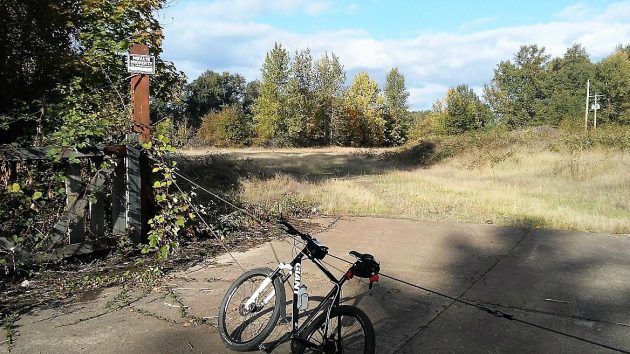 As you can see, nothing has yet happened at this site of the proposed River View apartment complex near Albany’s Bowman Park. I wondered about the status of the proposal, and so I asked.

It was back in January that Robyn and Patrick Morley of Salem approached the advisory board of the Central Albany Revitalization Area. Their company, Willamette River View Holdings, owns the riverside property across Geary Street from Bowman Park. They didn’t have a specific request but hoped to interest CARA in a potential partnership to develop an apartment complex on the former industrial site.

I took the photo at the top on Oct. 9. Then I contacted Morley for an update, and he promptly replied to my email.

“We are still in the planning stages and made some adjustments based upon the community input,” he wrote.

Among other things, they’ve scaled back the size of the development from 130 to about 100 units.  Also they are now thinking of three-story rather than four-story buildings facing the river. But they still contemplate townhouses along Linn Avenue, on the property’s south side, to ease the transition from single- to multi-family use.

What about the timing?

“We will likely submit an application with the city in the next three months,” Morley wrote. “However, still a question on when we would actually start construction. The macro economics are rapidly changing as construction costs are at all-time high and interest rates have risen more than a full point in a very short period of time.

“On the plus side, we still see Albany as an under-served multi-family housing market with a ton of opportunity. In addition, the property is very unique and will offer a one-of-kind community. We need to make sure the risk/reward factors stabilize as this is a significant investment for our families.”

Long story short: If and when an apartment complex gets built on these roughly 6 acres is impossible to say with any kind of certainty at all. (hh)


One response to “River View project: Still in planning stage”