River art: One man’s work to make us smile 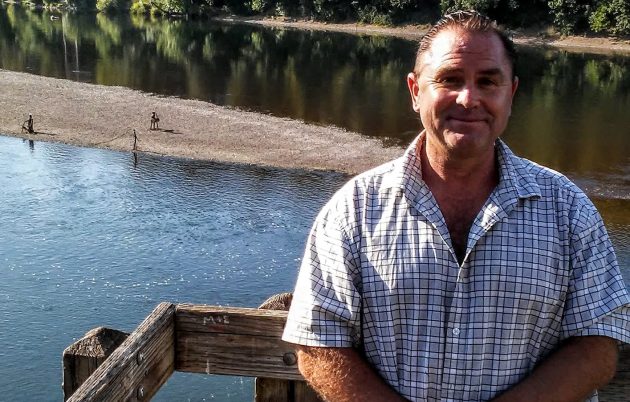 Nate Vanek with his latest three works of stick art on the gravel bar below.

Nate Vanek has been busy, creating art to entertain and amuse the people in Albany who happen to catch a glimpse of it.

Last week he put together pieces of wood and created two figures who looked like they were angling off a gravel bar in the Willamette River. Monday night he added a third. Tuesday night, before he talked to me, he had been trying to find wood for more.

Last spring, he painted a blank concrete wall at the Albany skatepark to make it look like the scene of a river or coastline. Before that, he fashioned a big dog out of pieces of wood and bark along one of the walkways in Waverly Park. And in October last year, he made people smile with a stick figures he set up in Bowman Park.

“For me,” he told me Tuesday, “making something out of nothing, that does something for me.” And then there’s the kick he gets out of seeing the enjoyment people get out of seeing his creations.

At 48, Vanek lives downtown and has been bouncing around various jobs. He once aimed to become a professional competitive fisherman. He also was a milkman, he says, one of the last of their kind. I first learned about him last spring at the Habitat for Humanity ReStore, where people praised him as a helpful volunteer. That’s where over one weekend he had painted the mural on the skatepark wall.

He’s an artist specializing in oil paintings of fish, paintings that are for sale. You won’t be surprised that some of his paintings feature fish in whimsical scenes, like sitting at schoolroom desks — or talking to a reporter on the Broadalbin Street pier.  (He whipped that one up after I arranged in the afternoon to meet him there at 6.)

Wading out to the gravel bar in the river has been kind of tricky. The shallow river flows fast in places, digging a deeper channel. On Monday night, he says, the current almost swept him away.

He keeps at it, though. The harder it is to reach that island of gravel, he figures, the longer his wooden creations are likely to stick around. (hh) 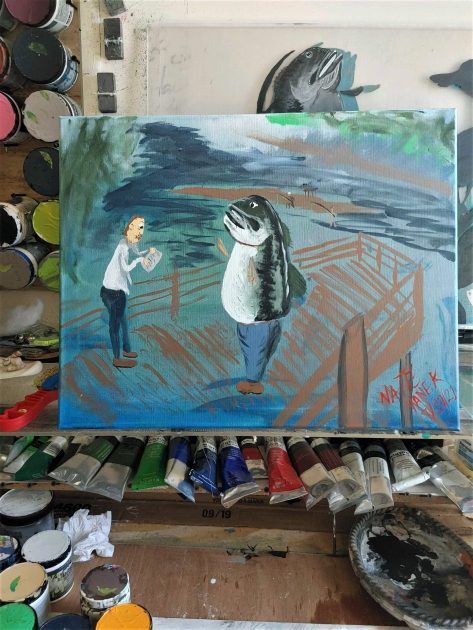 Nate gave me this scene he had painted just before I met him on that pier.


22 responses to “River art: One man’s work to make us smile”