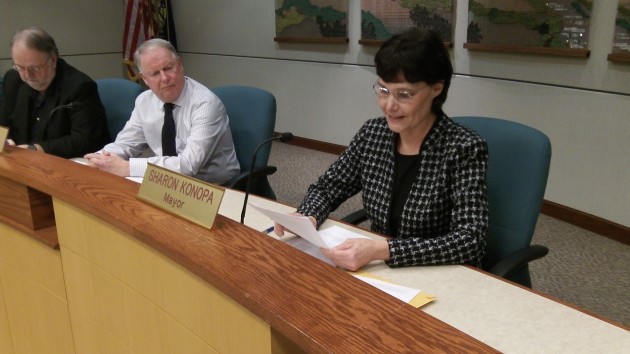 Mayor Sharon Konopa (in a file shot from January) will testify against the misleadingly labeled “Right to Rest Act.”

Among the misguided bills pending in the Oregon legislature, SB 629 is just one. But it has drawn the attention of Albany Mayor Sharon Konopa because it could easily undo what the city has done to try to help homeless people get their lives together and themselves off the street.

Introduced by several Democrats at the request of something called the Western Regional Advocacy Center, the proposal is billed as the “Right to Rest Act.” It would make it illegal to try to keep people from “resting” or sleeping, or camping, anywhere on public property.

Among other flights of high-mindedness, the bill contains this sentence: “It is declared to be the public policy of Oregon to guarantee persons experiencing homelessness participation in the social and economic life of this state, remunerative employment, use of and free movement within public spaces, participation in and receipt of the benefits of the services, programs and activities of state government and local governments and housing accommodations of the person’s choice, without discrimination on the basis of the person’s housing status.”

Oregon will “guarantee” homeless people gainful employment? Does this apply to everyone or only to the homeless? Where does one go to collect on that “guarantee”?

Albany has started various programs to get homeless people into housing and to hook them up with programs that could help them. But trying to clean up filthy and dangerous encampments is an important part of the city’s approach. The bill would prevent the city and other agencies from occasionally cleaning out homeless camps. ODOT could not fence off space under bridges where campers used to hang out.

Advocates for the homeless are pushing a similar “Right to Rest Act” in the California Assembly, where it is known as SB 608. Mark Ryavec, the president of a community group in Venice, writing in the Los Angeles Times on March 8, argues against it on the grounds that it would further restrain cities in dealing with a growing problem. Instead, he urges legislators to overhaul “our dysfunctional mental health laws.” Otherwise, he says, “the police will remain shackled, and vulnerable residents will watch their quality of life deteriorate even further.”

As for Konopa, she plans to testify against the Oregon bill at a hearing of the Senate Committee on Human Services on March 12. To her, trying to stop the legislation is a no-brainer. Passing it would help homeless people stay that way, Konopa says, and it would reverse “everything myself, homeless advocates, nonprofits and the city of Albany have worked on to help the homeless get into housing.”

In short, the bill is the opposite of what the homeless need. (hh)