Right on time, back after a long trip 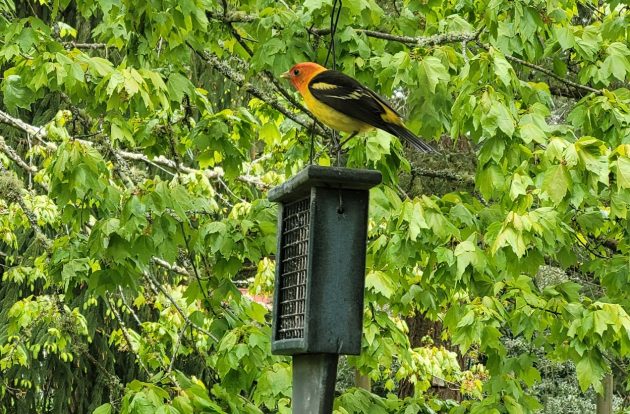 With its red head and yellow body, this western tanager made an impression on Friday.

Over the last couple of days a small group of colorful visitors presented themselves at the feeder outside my window, fairly inviting themselves into this blog.

They were western tanagers, and there were males and females in the group, but the females were not that colorful and did not ask to be photographed.

One of my bird books is “Birds of the Willamette Valley Region” by Harry Nehls, Tom Aversa and Hal Opperman, published by R.W. Morse Company in Olympia, Wash.

The book says the western tanager is common in the valley from May to September. So this little flock got here right on time, it appears.

Where did they hang out before making their appearance in Albany? According to the book, they wintered in central America, somewhere from Mexico to Costa Rica.

It’s warmer there, and presumably sunnier too. Smart birds, you tanagers. Thanks for coming back, and glad you survived the long trip. (hh)

One gets ready for a snack while his friend is waiting his turn. 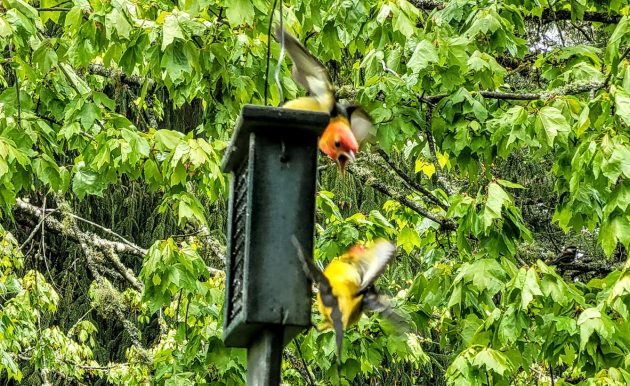 Hey, no reason to get angry. There’s enough suet for two.


6 responses to “Right on time, back after a long trip”