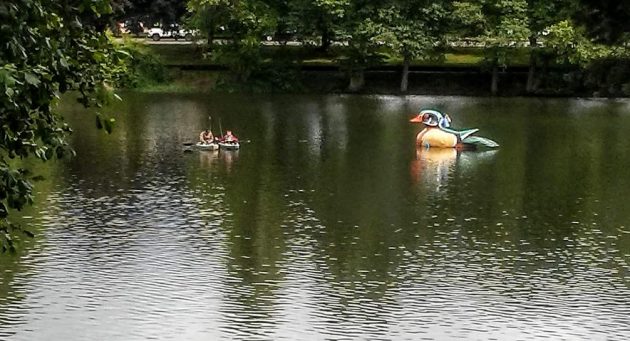 Somebody is sitting on the Waverly Duck on Saturday afternoon.

You can look at the Waverly Duck. You can photograph it and paddle around it. One thing you’re not supposed to do, I’m pretty sure, is climb aboard.

Somebody did just that as I was passing the pond on Saturday afternoon. I didn’t see the circumstances, such as how the person got on the duck’s back, and his or her identity including age is unknown to me.

I’m left with the supposition that some knucklehead saw the thing floating there in the middle of Waverly Lake and thought it it would be a lark to climb on its back, perhaps from one of the kayaks hovering nearby.

The duck was removed from the lake several years ago because it was in poor shape, partly because of what people had done to it.

After being repaired and repainted in a private effort, it was donated to the city and returned to the lake in 2017, to float there during the summers.  During the winter it’s put in storage.

Its most recent hibernation ended when the parks department placed it back in the water on May 27.

People clambering all over the thing can’t be good for the fiberglass shell or the paint. You’d think people would know that without a big sign telling them to leave the duck alone. Evidently not. (hh) 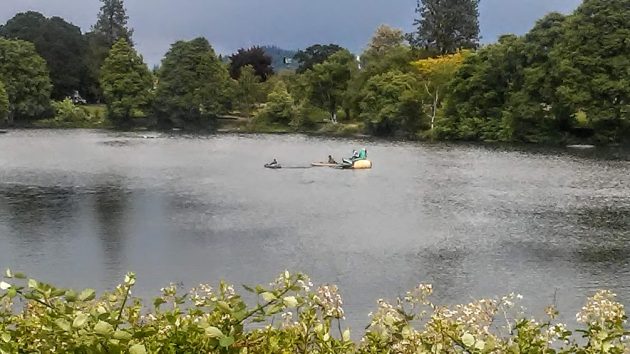 And here’s another view, from the west end of the lake.