Riding in the ‘bike gutter’: Clean but risky 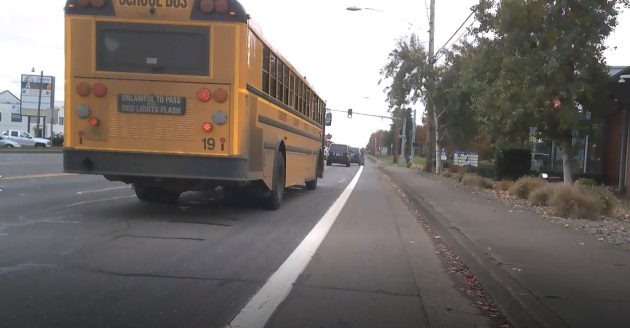 That stripe on the ground marks the bike lane on Albany’s Pacific Boulevard S.W

Watching a video on urban planning and transportation the other day, I heard the presenter refer to “bike gutters.” What did he mean?

He meant, sad to say, the kind of bike lanes we have on major highways in Albany and elsewhere. He used the term in a mocking way, but it fits when the bike lane is right next to the curb.

Here, take a look and see what I mean:

On Highway 99E, Pacific Boulevard, they put the bike lane right next to the curb because there’s no curbside parking. There’s no parking on that highway through Albany at all, and that’s fine. But if you’re riding in the bike lane, the traffic roaring past your elbow at 45 mph or more takes some getting used to.

What could be done differently to make cycling on Pacific, and on similar highways with sidewalks, more common and less nerve-wracking or risky?

There are several ways, and you can see them illustrated in the YouTube video I watched about cycling facilities in the Netherlands compared to the cities in North America. (The YouTube series is called “Not Just Bikes,” and it’s well done. Take a look.)

Around here, most of what you see in those videos is impractical because we’re talking about retrofitting. But on highways like Pacific, which was widened and “improved” with curbs and gutters some 30 or 40 years ago, they might want to do it differently if they had to do it today.

The sidewalk is rarely used for walking. And because of high-speed motor traffic, the bike lane is uncomfortable for cycling. Why not combine both paths or lanes? Provide a single 8-foot-wide way for walkers and cyclists and build it a foot or two to the right of the curb.

That would not just eliminate the bike gutter. It would get cyclists out of the roadway, and this would be safer for them and for motorists as well. (hh)


14 responses to “Riding in the ‘bike gutter’: Clean but risky”