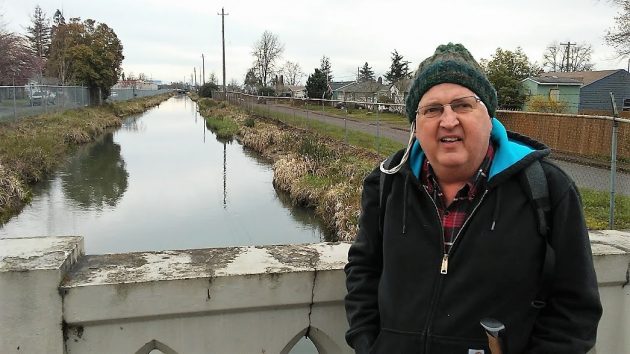 With the fenced-in Santiam Canal behind him, Jim Ketter stands on the 12th Avenue bridge Wednesday.

Jim Ketter doesn’t know how much longer his brain tumor will allow him to live. Before he goes, he’d like the city of Albany to do something about the fencing that lines the Santiam Canal.

“Barbed wire belongs on ranches and farms, prison yards, and around impound and salvage yards, but running through this neighborhood as it does, it looks ridiculous (because it is) and trashy (because it is),” Ketter wrote in a letter to Mayor Sharon Konopa and Councilman Dick Olsen — and then, at Olsen’s suggestion, to me.

“There is nobody … wanting to get into the canal so badly that they are being stopped only by that barbed wire atop the 6-foot fence,” he added. “The barbed wire serves absolutely no purpose. There are several access points that have no barbed wire. It simply makes no sense and looks really, really bad.”

The canal runs in the middle of what would be Vine Street from Queen Avenue to the Vine Street treatment plant and power house, right through the Monteith Historic District. It’s a couple of blocks from the Washington Street house that Jim and Ann Ketter bought 12 years ago.

Years ago they read about and welcomed the plans for an “esplanade” along the Santiam Canal and the branch that runs along Eighth Avenue and Thurston Street. The plans, in the downtown urban renewal program, have been ignored since the CARA renewal district was formed in 2001.

Ketter doesn’t expect the esplanade idea to be carried out. But he says the canals could be made much more useful to their neighborhoods with simple and inexpensive steps. His suggestions, besides getting rid of the barbed wire, are to lower the fencing, plant some trees, maybe set up a few benches and trash cans.

He’s willing to pitch in to get it done, though his illness has slowed him down. Ketter taught physics and related subjects at Oregon State University until the cancer hit. I met him Wednesday and together, we slowly and carefully walked the two blocks down 12th Avenue from his house to the canal.

Now 60, he told me he’s already survived longer than expected when his tumor was diagnosed a year ago. He undergoes regular chemo treatments in Eugene. He carries a battery pack, and his scalp is covered with patches of electrodes that bombard his brain with pulses intended to kill fast-growing cells, which cancer cells are.

His six-page letter to Konopa and Olsen is full of praise for the things Albany has done to improve the town — the Dave Clark Path, reconstruction downtown and the renovation of the train depot among them. “Do not be deterred by the complainers,” he wrote. “Ignore them. They need to be ignored because they are wrong. Things that make a city nice aren’t a waste of money.”

Doing the canals would continue the work. “If nothing else, remove the barbed wire now. It would be an immediate, cheap, possibly nearly free improvement.”

We got back to his house on Washington Street. Stairs sometimes give him trouble now, but he made it up to the porch without problem. I thanked him and wished him well, and I hope that if nothing else, he lives to see those strands of barbed wire in his neighborhood disappear. (hh) 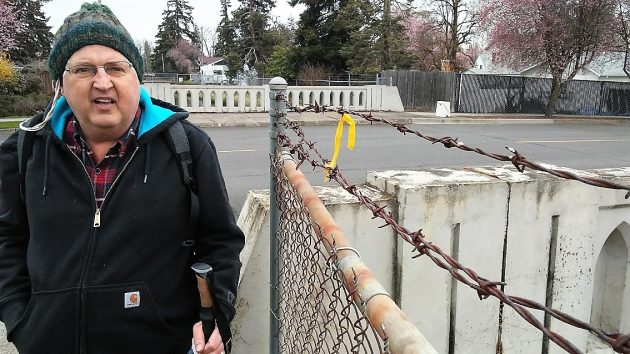 Jim Ketter dislikes the rusty chain link fencing and barbed wire, but he wishes the concrete railing on 12th Avenue could be replicated on other bridges over the canal.