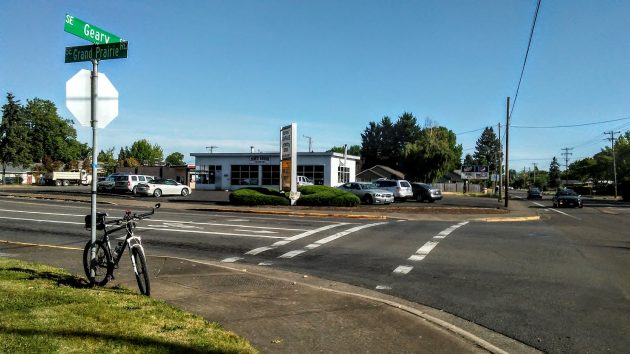 On June 6, looking across Grand Prairie at the corner properties that were rezoned this week.

Like the major supermarkets, Albany’s gas stations are clustered in the north half of town. Now a rezoning action completed this week opens the way for a new fueling station to be built on the south side.

The city council on Wednesday took final action to rezone about 1.4 acres on the southeast corner of Grand Prairie Road and Geary Street from “neighborhood commercial” to “community commercial.”

The change covers two properties. One, at 2515 Geary St., has a store built in 1966. It used to be a market and has operated as a convenience store in recent years. The other property, on the corner, at 1810 Grand Prairie Road, has a car repair shop that was built in 1964 and used to be a service station.

In their application, the property owners said they wanted the zone change “to facilitate construction of up to four fuel pumps with up to eight fueling positions with an overhead canopy and associated site improvements” at the Geary Street address. The owners told the city they’d like to put the fuel pumps west of the convenience store.

Gas stations are not allowed in the “neighborhood commercial” zone, but they are a permitted use in “community commercial.”

The council took two meetings to approve the zone change. But the final OK was unanimous.

Now that the zone has been changed, the applicants will need to get city approval of a site plan before they can go ahead with the fuel pumps.

A look at Google Maps confirms what Albany motorists already know: All but two of the town’s 15 gas stations are situated along Pacific Boulevard or Santiam  Highway. If one is built at Geary and Grand Prairie, it will be the only one south of Queen. (hh)